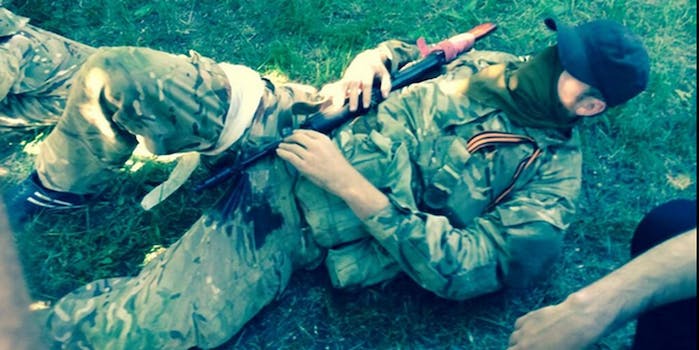 Both sides of the fight are using Twitter to spread their message.

Warning: This article contains graphic images that may be disturbing to some readers.

Just one day after Ukraine elected incoming President Petro Poroshenko, a billionaire widely regarded as strongly pro-European, pro-Russian rebels are battling national forces for control of Donetsk airport in a city located deep in the heavily contested eastern region of the country.

After a gun battle during the day subsided, Ukrainian troops reportedly launched air attacks in an effort to push rebels out of the airport. Grizzly photos of bloodied bodies have rapidly spread through Twitter in the wake of the air attacks.

One particular photo of what looks to be the dead body of an elderly woman covered with cardboard quickly became an icon of Monday’s violence.

Body of a beheaded old woman in front of #Donetsk railway station. Unclear what happened. pic.twitter.com/Nr1561uwFP

The elderly woman was killed near Donetsk city railway station. Media outlets and locals have latched onto the various images of her, but the full story of how she died remains unknown due to the fog of war.

Early on Monday, President-elect Poroshenko vowed to bring an end to the fighting with separatists. Russia’s diplomat to the country said Moscow was ready to speak. Hours later, the air strikes in Donetsk began. Ukrainian fighter jets launched rockets at rebels and the airport is now billowing smoke. It’s unclear how Moscow or the separatists will react.

Despite the apparent success of the elections, no polling stations had been open in Donetsk or in much of the surrounding region due to ongoing violence.

DPR terrorist shot near groin during fighting at airport and later transport back into #Donetsk @EvgenyFeldman EMPR pic.twitter.com/HeEFf7zYw4