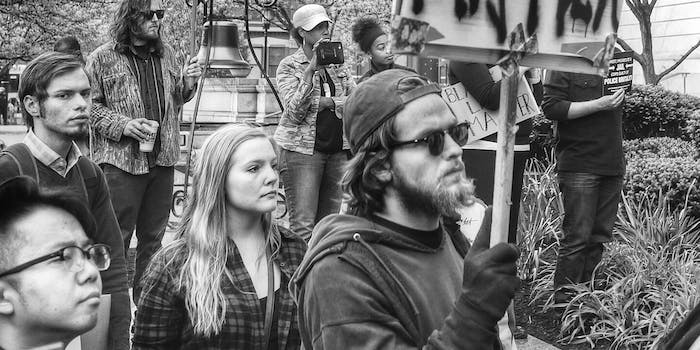 One year after Ferguson, police brutality against unarmed white people speaks to an important truth.

One year after Ferguson, America has yet another high-profile case involving a police officer shooting an unarmed, young man. The teenager’s name: Zachary Hammond. He is white—and so is the cop who killed him.

As the Huffington Post’s Nick Wing noted, Hammond was the subject of a drug sting, where an undercover female cop busted the 19-year-old for purchasing marijuana. Based on conflicting accounts, the police officer—a white male—claimed he feared for his life, fatally firing at Hammond’s vehicle; he argued that it was being used as a weapon. However, some reports claim the bullets were shot in a direction that doesn’t corroborate with the officer’s claims—rather, Hammond was a scared young person trying to get away from the law for a fairly minor offense.

There’s been little to no outrage about his death, aside from black activists on Twitter, and the lack of mainstream attention is indicative of a national climate quick to affirm that #AllLivesMatter and #BlueLivesMatter, at the expense of having a real conversation about police violence. Hammond’s death, then, forces us to reckon with an uncomfortable truth: Whereas our system of laws and policing practices disproportionately affect black people, unarmed white people can also be subject to the ills of police brutality, even if it happens relatively less.

That’s why #BlackLivesMatter isn’t just a movement for black people. It’s also a movement for everyone in America to be free from the evils of police abuse. Because in addressing the needs of the people who are most vulnerable, we help fix those problems for everyone.

Although Hammond is a young white man, his death was the result of the War on Drugs, a decades-long campaign that targets black people for low-level crimes at a devastating rate. Hammond’s death also follows the exact same pattern as a number of other police shootings that have taken the lives of innocent black people.

In Cincinnati, a white police officer was recently indicted for killing 43-year-old Sam DuBose, an unarmed black man, when he allegedly attempted to get away during a traffic stop over a missing license tag. The officer claimed he was being dragged by DuBose’s vehicle, which an investigation found to be false.

And two years ago, during the height of a government shutdown in Washington, Miriam Carey was killed while attempting to make a U-turn at a White House checkpoint. Some officers alleged that the unarmed 34-year-old’s car could have been used as a weapon—just like in Hammond’s case—thus justifying the 26 shots fired. Remarkably, her one-year-old survived, left without a loving mother to care for her.

In death, Carey, a dental hygienist from Connecticut, was praised by her boss, Barbara Nicholson, as a woman who was a consummate professional and a faithful parent—one who may have done a very human thing when confronted with armed officers. “We all speculated that she was trying to get her child out of danger, when she was confronted with people with guns, because that’s what she would do,” said Nicholson.

Like DuBose and Carey, Zachary Hammond likely feared how law enforcement would respond to a relatively harmless infraction. The same could also be said for Mya Hall, a black transgender woman who was killed by police after taking a wrong turn; Hall ended up at the wrong exit, which led to headquarters for the NSA. As the Daily Dot’s Aja Romano reported, Hall was driving a stolen vehicle and was fatally shot because she was allegedly attempting to “ram” the gates.

Understandably, stealing a car is a crime, but was that reported car theft worth Hall losing her life? No. Hammond, targeted by police because he attempted to buy marijuana, was committing a crime. But was getting high worth him losing his life? No.

That’s the point many activists and supporters of the #BlackLivesMatter movement have worked to bring into everyday discussions about the nature of policing. American law enforcement is a deadly game, and many officers routinely encounter tenuous, risky situations. It can be even deadlier when you don’t have power backed by the state, you don’t have a deadly weapon, and you don’t have whiteness to protect you. Being white is not a “Get Out of Jail Free” card, but research proves that white people don’t encounter police abuses nearly as much as their black counterparts.

Where are all the #AllLivesMatter people when it comes to #ZacharyHammond? All y'all looking funny in the light. pic.twitter.com/VeCbLAliG2

Hammond isn’t the first and won’t be the last unarmed white person to face police brutality. Weeks before him, Louis Falcone, a 30-year-old white gay man in New York City, was dragged from his home and severely beaten by four police officers, who allegedly did so while hurling anti-gay epithets. As the Daily Dot’s Mary Emily O’Hara reports, Falcone’s elderly mother called the police while he and his brother entered into a heated verbal argument; the victim’s brother showed up to his apartment belligerent after a long night of drinking. Officers allegedly used force first and asked questions later, the subject of a now $25 million-dollar lawsuit.

Aside from their own encounters with police abuses, a growing number of white people are finally realizing just how unfairly black people are treated by the police, as a Gallup poll released this week shows. In 2013, 67 percent of white people were satisfied with how black people were treated by police, an attitude that predated George Zimmerman’s acquittal in the shooting death of Trayvon Martin. Now, in 2015, that number has plummeted to 53 percent—a direct result of the Ferguson protests, which sparked a wave of national protests.

The past year of constant action, online activism, and media coverage has helped propel issues of race and policing into everyday conversations. But that 53 percent is a far cry from the 33 percent of black people who say they’re satisfied with how they’re treated. It’s a canyon-like gap between black reality and white imagination—making it clear that a post-racial America under a black President Obama simply doesn’t exist.

That’s an admirable, if not totally encouraging shift, all in a year’s work.

"I believe that the fantasy of "progress" in America is simply racism changing forms.”

It’s a struggle for many white and non-black people to understand the insidious, dehumanizing nature of institutional racism, for reasons that may not be their fault. It’s also important to understand how it may hinder an individual from understanding the true intention and purpose behind #BlackLivesMatter, let alone supporting or participating in the cause.

For white people, many of whom don’t have close relationships with black people, or may not have learned about black history aside from the brief references to slavery and Martin Luther King, it may take a lot of work and education to understand how racism works. For non-black people of color, the struggle to navigate America’s racial hierarchies is often a matter of survival. In trying to get by, or get ahead, it may be tempting to diminish or ignore the struggles of black people, believing it’s the only way to access resources and opportunities overwhelmingly controlled by white people.

To affirm that #BlackLivesMatter doesn’t make the discussion a zero-sum game, where one group gets better treatment at the expense of another. Because our struggles are interlinked, and intersect—as proven by the Hammond case and others like it—“all lives” won’t matter in the eyes of our law enforcement system until the needs of people who are most vulnerable and marginalized are addressed.

In the words of #BlackLivesMatter co-founder Alicia Garza, just months after Michael Brown’s death: “When black people get free, everybody gets free.”