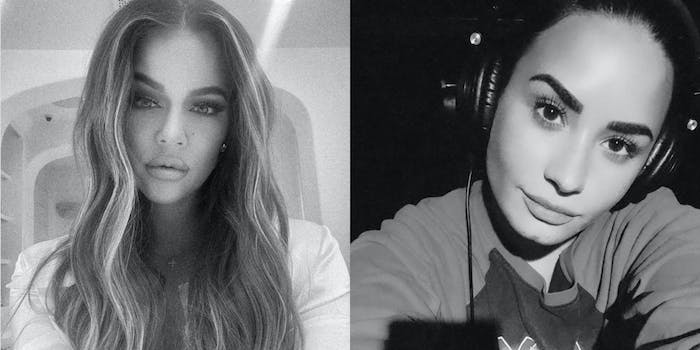 The black and white selfie challenge remains a mystery

How did the challenge start?

Black and white selfies have taken over Instagram. Even though the posts are paired with the hashtag #challengeaccepted, there’s some confusion about what “challenge” Instagrammers are accepting or how the hashtag even started.

The hashtag has over 4.5 million posts on the platform. While it has been used before for things other than this specific challenge, an Instagram spokesperson told the New York Times on Monday the posts under the hashtag doubled in the last day alone. Users also seem to be using the hashtag #blackandwhitechallenge, which contains around 1 million posts.

Like many other popular social media challenges, users are posting their own black and white selfies and then tagging someone they want to see join in on the challenge. In most of the image descriptions, women are writing messages of love and support for other women.

Many celebrities, such as Khloé Kardashian, Demi Lovato, and Eva Longoria, are hopping on the trend.

Some men, notably Piers Morgan, are also posting for the challenge.

“#challengeaccepted Thanks to all the women who nominated me for this specific picture,” Morgan tweeted Tuesday morning. “#womensupportingmen”

In an article published Monday, the New York Times compared the challenge to the photos of black squares that overtook social media at the beginning of June. The Times criticized the latest challenge for not requiring any real advocacy but instead being a performative, vague thing people can do to “show support.”

An Instagram spokesperson told the Times the earliest post it could find associated with the challenge was one by a Brazilian journalist in mid-July.

In the photo description, Ana Paula Padrão wrote “Desafio aceito,“ which means “challenge accepted” in Portuguese, and tagged @danicachich, who has a private account and did not accept the Daily Dot’s request to follow prior to publication.

Another New York Times journalist, Tariro Mzezewa, tweeted Tuesday morning that she spoke with women in Turkey about the challenge.

“Talked to some women in Turkey this AM who say it started there as a response to them being frustrated over always seeing black and white photos of women who have been killed,” she tweeted.

An Instagram account run by the American University Turkish Cultural Club has also posted about the challenge and its relation to femicides in Turkey.

Taylor Lorenz, the author of the New York Times story about the challenge, tweeted that she spoke with a representative from Instagram who investigated the origins of the challenge hashtags in Turkey.

“While we found b&w posts relating to women’s rights, it doesn’t appear related to the more recent #ChallengeAccepted resurgence,” the representative told Lorenz.