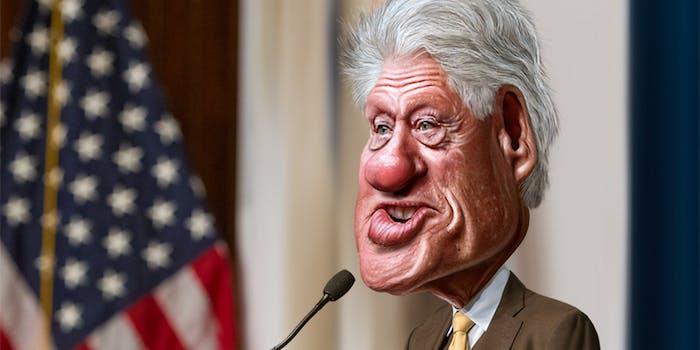 Whether or not these claims are true, why haven't we given them more attention?

As the number of rape allegations against Bill Cosby continues to rise, many conservative pundits are criticizing progressives for ignoring the sketchy sexual history of one of the Democratic Party’s greatest living icons: former President Bill Clinton.

“When it comes to these kinds of allegations some powerful men like Bill Cosby are taunted and hunted, while other powerful men with the first name Bill, who have faced similar allegations, are protected,” writes John Nolte of Breitbart, citing partisanship and race as among the main factors protecting Clinton. “[Clinton] still dominates Democratic politics, commanding an average $195,000 per speech imparting his wisdom and insights,” observes Ethel C. Fenig of The American Thinker. “Past allegations of rape and groping and using his power and charm to seduce women are ignored—or secretly admired.”

Even a liberal like Joan Vennochi of The Boston Globe notes that while “Bill Cosby’s career as a beloved comedian is in shambles… Bill Clinton’s career as revered statesman soars.” As Matt Walsh of Glenn Beck’s website The Blaze summed it up, “If we are dredging up rape accusations against formerly famous old man, why not talk about the ones surrounding a former president who still wields considerable influence and who might, God help us, end up in the White House again in two years?”

These are serious concerns—and not entirely without validity. However, to effectively confront them, liberals must do two things. First, they firmly establish the facts, at least insofar as we can know them. Then they must assess that information with a perspective that balances the ongoing struggle for gender equality—which can only be achieved by directly confronting rape culture—and maintaining the vital presumption of innocence until proven guilty.

What are the facts? Although Clinton’s philandering reputation has caused him grief throughout his political career, it’s important to distinguish between consensual infidelities—such as Gennifer Flowers and Monica Lewinsky, who has vehemently denied claims that her relationship had been coercive—and allegations of non-consensual acts like sexual harassment or assault.

The most famous woman to accuse Clinton of the latter was Paula Jones, who sued the president for sexual harassment after she claimed he had exposed himself to and propositioned her in a hotel room. Not only did Clinton’s perjuring of himself in response to a question about this case lead to his impeachment trial, but the case ended with an out-of-court settlement of $850,000, even as Clinton continued to deny Jones’ story.

As the Jones lawsuit and Lewinsky scandal riveted America’s attention, three women emerged to accuse Clinton of assault: Juanita Brodderick, who accused Clinton of biting her lip and forcing himself on her in a hotel room in the late 1970s; Kathleen Willey, who claimed Clinton groped her in a hallway in 1993; and Elizabeth Ward Gracen, who alleged that Clinton had forced himself on her in the backseat of a limousine in 1983.

Brodderick later withdrew her allegations due to anxiety over needing to testify over “the most horrific event in my life,” Willey was determined to have given “false information” by an independent counsel but granted immunity in exchange for her testimony during Clinton’s impeachment, and Gracen recanted her story and apologized to Hillary Clinton for participating in what is now alleged to be a one night stand.

Other stories stretching back to Clinton’s college days continue to abound among right-wingers bloggers but have yet to receive scrutiny from reputable journalists.

A panel study by the National Research Council noted massive discrepancies in the sex crimes data reported through agencies ranging from the Census Bureau and the Center for Disease Control to the FBI. “We all know that rape and sexual assault are the most underreported crimes in the world,” explains Christopher Krebs, a sexual violence researcher at RTI International. Police officers are notorious for dismissing rape claims presented to them based on a misunderstanding of the cues and signs that someone has just been traumatized.

This carries over to our judicial system; as Nancy Schwartzmen of The Line Campaign told Jezebel, “we have juries who rely on CSI and SVU to dictate to them how rape ‘really’ works, what victims and perpetrators look like, and how cases should play out in a courtroom” instead of having social workers and trauma experts “explain the complexities of PTSD and what are normal and common ways that victims respond to rape.” In light of this, it’s hardly a surprise that only 3 percent of rapists will ever serve jail time for their actions.

At the same time, liberals need to exercise caution in prematurely rendering judgment. Although Hillary Clinton was mocked by conservatives for insisting her husband was the target of a “vast right-wing conspiracy,” considerable evidence has emerged that Clinton (like Obama after him) was endlessly assailed with exaggerated and fabricated stories generated by a hostile Republican apparatus in Congress and the well-funded conservative press. These culminated in an impeachment so unpopular with the public that it cost Republicans five House seats and allowed the Democrats to break even in the Senate in the 1998 midterm elections.

Even if one casts aside this unusual and important variable in the Clinton allegations (which automatically puts him in a very different category than non-presidents like Bill Cosby), there is also the fact that experts estimate that 2 percent to 8 percent of rape claims are false. This means that while the overwhelming majority of rape claims are credible, a small fraction are flat-out lies, including high profile incidents like the Duke lacrosse team case and a woman who allegedly lied about being raped by an indie rock singer “to get attention.”

When this is pointed out, the goal is not to cast aspersions on all rape victims, but rather to observe that the right to be presumed innocent barring evidence of guilt needs to be maintained. Whether it’s in a literal legal proceeding or the court of public opinion, everyone deserves this protection.

For most of the conservative writers, the primary culprit for the double-standard between Cosby and Clinton was politics—namely, the liberal dissatisfaction with Cosby’s culturally conservative criticisms of the black community in his controversial “Pound Cake speech” in 2004. “Liberals have seized on the opportunity not to discuss rape itself,” Walsh mused, “but to prove that Cosby’s thoughts on race are illegitimate because some women accused him of it.”

While it’s true that comedian Hannibal Buress did in fact frame his criticism of Cosby’s rape allegations as a way of attacking that speech, the extensive discussion of rape culture among online feminists in recent years undermines the idea that the left only took interest in the Cosby case out of a collective spasm of ideological vindictiveness. What’s more, conservatives have been just as willing to turn a blind eye to the sketchy pasts of their own modern champions (see: Ronald Reagan’s racism), so there is more than a smack of hypocrisy in their tone of self-righteous indignation.

It’s understandable why liberals want to protect Clinton: Not only is he an incredibly popular former president, but the impressive economic growth cultivated during his presidency remains a cherished memory for Americans mired in the stagnation and recession that have marred the George W. Bush and Barack Obama administrations.

More importantly, as Hillary Clinton continues to be the presumptive frontrunner for the Democratic presidential nomination in 2016—a status that makes it quite possible she’ll become America’s first female president—the impulse to protect the Clintons’ political brand—and, thus, this historic opportunity—is even more acute. Then again, if liberals allow their desire to achieve one milestone obscure the larger cause that milestone is meant to serve, we will have sacrificed the war in the name of an (admittedly very important) battle.

Our best hope remains that the truth ultimately prevails, whatever it may be.