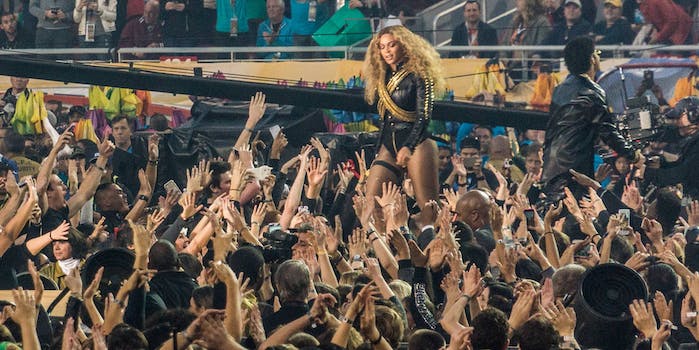 Brave man dares to read a book at a Beyoncé concert

What could possibly compare to Beyoncé?

Beyoncé has a hold on many of us. When she drops a new album, we listen. When we have the privilege of seeing her live, we bask in her presence, for she is the Queen B and to deny her your attention is to invite humiliation and online vitriol courtesy of the infamous #BeyHive.

Fortunately for one man attending a Beyoncé concert in Raleigh, North Carolina, he seems to have been spared—for now.

This guy is much more interested in his book than in being “Drunk In Love” with Beyoncé. Maybe his wife dragged him along; maybe his daughter did. All we know is that the dude is brave, casually reading something as history is being made right in front of him.

But seriously, what was he reading that was so captivating that he never once looked up to see what was going on during that video? Oh, well—another life mystery to which we may never know the answer.

Update 2:15pm CT, May 6: Finally, some answers. The avid, unbothered reader is George Papageorgiou. He and his wife had been “working concessions at the venue for his church,” according to ABC 11, and pulled up chairs to (not) watch the show when they had finished.

Anyway, the book he was reading? Jules Verne’s Danube Pilot—in Greek. He explained that it was a copy his parents bought him more than half a century ago, in Cairo, when he was just 13.