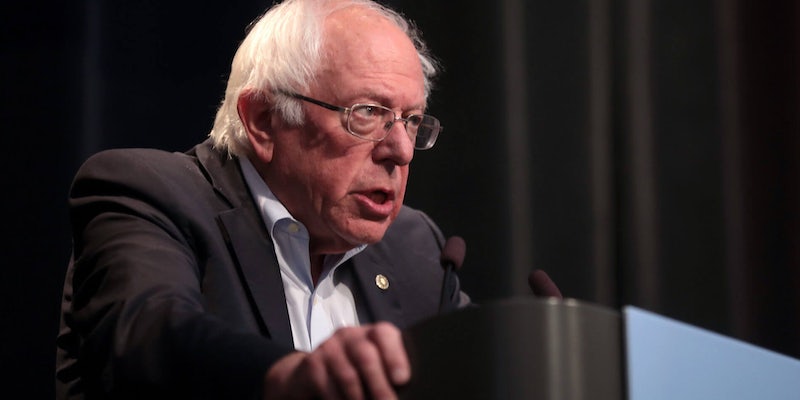 Bernie is back, and so are the memes.

Now that Sen. Bernie Sanders (D-Vt.) is well into his run for the Democratic nomination for 2020, the social media wars that characterized his run in 2016 have reignited.

Without getting into the original Bernie vs. Hillary saga of 2016, or the new fights that are emerging as the Democratic primary candidates co-opt his platform, Sanders’ entry into the race will have one effect for sure on the social discourse: memes.

Hillary Clinton might have won more delegates, but to his supporters, Bernie Sanders had both the best policies and the best memes.

Bernie memes were a ubiquitous part of social media for nearly two years, spawning so many images that they were even collected in a Facebook group called, naturally, “Bernie Sanders’ Dank Meme Stash.” And they’ve returned for 2020, of course.

Even if you thought Bernie’s ideas were unworkable, you had to admire the meme-ing skills of his fans, who had an innate understanding of the power that social media has to amplify and spread images.

There was the meme comparing Hillary to Bernie, one that had so many versions it inspired its own Meme Generator Link:

Then were the memes inspired by a small bird landing on the lectern as Sanders was giving a campaign speech.

You do realize more mundane, natural explanations might exist for the bird's abnormal behavior? But please call us once you've mastered this "cheap parlor trick" to steer birds away from pooping on cars–you could make a fortune! pic.twitter.com/A0GujXCoPc

The 2016 election spawned more Bernie Sanders memes than could ever be viewed by one person.

How is the meme effort going so far in 2020? Judging by these early examples, not too shabby.

It began with his campaign announcement, which shattered fundraising numbers.

There is only one real frontrunner. #Bernie2020 pic.twitter.com/AT2qJY0u9t

And the fact that his announcement would strike fear into the hearts of the rest of the crowded field.

And it’s still going strong with the Iowa Caucus less than six months away.

Since Bernie didn’t win the 2016 primary, there was no opportunity for the second wave of memes, pitting him against Trump.

But now, many Sanders supporters are skipping the inconvenient fact that the Democratic primary is still six months away and anointing him the winner. And that means

A better world IS possible & after @BernieSanders takes to the Oval Office in 2020, that world will become a reality! I hope this poster gives you as much hope as it gave me making it. Celebrate the Peoples #PresidentsDay the right way!#Bernie2020 #RunBernieRun#BernieSanders pic.twitter.com/4fktXiAeOw

“I don’t like bullies; I don’t care where they’re from." @CaptainAmerica #FeelTheBern #Bernie2020 pic.twitter.com/tewGVgvnlW

I just got back from Bernie Sanders' Dank Meme Stash and pic.twitter.com/KVZPH2Gt9Q

Even the Bernie Bird hates Trump.

So is Trump worried about Bernie?

So far, he’s been fairly quiet about Democratic primary candidates, dredging up old racist jokes about Elizabeth Warren, but being weirdly complementary toward Kamala Harris, mocking Beto O’Rourke as a young man with “little going for himself,” and focusing a great deal of ire toward Joe Biden.

What did Trump have to say about his former potential general election foe? Crazy Bernie was back!

Nobody knows what will happen in the next year.

Except that there will be dank memes.