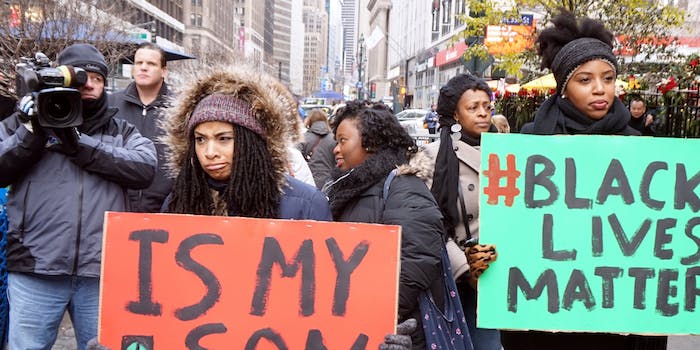 If Bernie Sanders actually thinks #BlackLivesMatter, he needs to let them speak

Silence is not solidarity.

A year after Ferguson, white liberals still have a lot to learn when it comes to being allies of the #BlackLivesMatter movement. Democratic presidential candidate Sen. Bernie Sanders (I-Vt.) has faced repeated criticism from Black Lives Matters activists, who accuse him of having a blind spot on race when it comes to inequality America.

We got a reminder of this over the weekend, when Sanders’ speech at an event in Seattle was interrupted by two Black Lives Matters protesters, Marissa Janae Johnson and Mara Jacqueline Willaford. The activists took the stage at the Sanders rally amidst heckles and boos from the mostly white audience. Johnson demanded to be heard, despite being told to wait her turn by the event organizer. “I was going to tell Bernie how racist this city is, filled with its progressives,” Johnson said, “but you already did it for me, thank you.”

The event has since sparked outrage from Sanders supporters, even prompting the campaign to urge their audience at an event in Portland to shout “We stand together” to effectively silence any potential Black Lives Matter interruption. As Sanders supporters chide Black Lives Matter protester’s efforts to hold the Vermont Senator accountable, they reveal a problem in how black lives are regarded on the left—and a general misunderstanding of the history of Civil Rights in this country.

Of all the responses to the Johnson and Willaford’s civil disruption of the Sanders event, most highlighting the apparent “anger” and “shouting” of the activists, the most grotesque drew false equivalency between segregationists in the 1950s to Black Lives Matter’s criticism of Sanders.

In the image, posted to Reddit on Sunday, Willaford—who appears to be yelling at Sanders—is placed next to an image of segregationists screaming at Elizbeth Eckford, one of the Little Rock Nine. They first black students to attend high school in the Arkansas capital. The caption on the image reads: “Hate.”

Not only is this criticism incorrect and offensive, it exposes a stark misunderstanding of the power dynamics at play. In Arkansas in 1957, segregationists were speaking out against progress and against the very idea of black people receiving the same education as whites. On the other hand, Black Lives Matter must use disruption to push for progress, in order to simply be heard in the overall dialogue.

Silence is not solidarity—but neither is faux-allyship. Simply retweeting a #BlackLivesMatter tweet or saying “racism is bad” is not the fight the movement is looking for. It’s easy to express support, but as writer and social worker Feminista Jones writes, the movement needs co-conspirators more than allies. “The definition of allyship is to mutually benefit and support. Black people are not obligated to provide support to people who are dominant,” Jones told the Guardian. “My goal is to live. You don’t have that same goal.”

Silence is not solidarity—but neither is faux-allyship. Simply retweeting a #BlackLivesMatter tweet or saying “racism is bad” is not the fight the movement is looking for.

What Johnson and Willaford—like Jones—is offering is a call to action. It’s not a rejection of white people from Black Lives Matter—it’s an invitation for them to do the work, to listen, to amplify black voices, to roll up their sleeves, to do the work, and to stand alongside black people in the movement. Ijeoma Oluo writes, “It may make some people uncomfortable, it may make some people angry—and if it does, you should ask yourself: Why weren’t you angry already?”

Now it’s simply a question of whether or not white people are willing to do step up. Sanders’ new racial justice platform, released Sunday, has addressed the issue by making it a key component of his campaign. It directly addresses four types of violence against black people: physical, political, legal, and economic. The timing couldn’t have been more eerie. The same night, as protests commemorating the one year anniversary of Michael Brown’s death, police responded with tactical riot gear, and a black teenager, a friend of Brown’s, was shot.

However, it’s going to take a lot more than political stump speeches to make any effective change in America. First, it demands that Americans acknowledge their complicity in white supremacy—no matter where they fall in the political spectrum, from far right to far left. It also requires letting Black Lives Matter be heard—not just on the Internet, but at the microphone. And if it takes disruption to do so, that’s OK. No substantial change has taken place in the country without demanding to be heard.

And if Bernie Sanders remembers anything from the time he spent in support of the Civil Rights Movement—a point about which he likes to boast—he would know that it’s time he waited his turn and deferred to the women fighting to stand on stage with him.