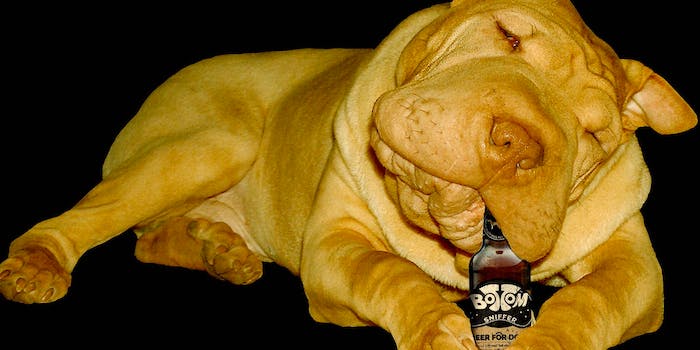 Beer for dogs exists so that man’s best friend can turn up, too

It seems like something out of One Sentence Startup Pitches, a 16,000+ strong Facebook group committed to mocking every half-baked elevator pitch out there. Hell, the group’s cover photo is a Photoshopped image of Mark Zuckerberg in front of a video wall emblazoned with the phrase “Facebook for dogs.”

Beer for dogs is real as fuck, though. And it should help you turn up with your favorite non-human companion. These non-alcoholic, surprisingly mild refreshments come in meaty flavors and may not have the boozy effects of a normal brew, but dogs love them just the same. Dogs also have their pick of the litter, so to speak.

There’s Flat 12, which annually trots out its 12 Paws dog brew as part of a Jeffersonville, Indiana fundraiser and pet adoption festival known as Dogapalooza. But recently, another canine-inspired brew has hit the digital shelves, providing dogs around the world with the opportunity to chill out with a cold brew after a long day of licking their own asses.

Nah, it didn’t need to. What with its “feel good” and “anxiety” blends of tonics, Woof & Brew had already contributed to the burgeoning legal doggie drug market out there, chilling pets out like an illicit tea house in the back of a bodega.

The Daily Dot has reached out to the folks behind Bottom Sniffer. Woof & Brew managing director Steve Bennett states that a veterinary surgeon was consulted prior to bringing Bottom Sniffer to life. Though getting your Schnauzer shitfaced sounds awesome in theory, it may be potentially dangerous for your dog.

“We take a great deal of care when developing a brew, ensuring that it is safe to drink,” Bennett explains. “It is brewed and bottled in a sterile environment to ensure that the brew remains in good condition for at least 18 months. I would not recommend this is [sic] something that could be done at home.”

Bennett and co. have tried Bottom Sniffer. He describes the beer as “not at all unpleasant” and similar to a “malt drink,” which is pretty much a ringing endorsement if you’d like to swap your Colt 45s for something a little less liver-wrecking.

Making beer can be a difficult science, a time-consuming endeavor that’s as many parts patience as it is rotting grains and potent yeast. Woof & Brew may have high standards but lucky for brewers catering to dogs, their clients really don’t give a shit. Hell, they eat excrement right up.

Prepare yourselves for an onslaught of doggie home brewers DIY’ing their way into turning their canine companions into drinking buddies.

Update 6:29pm CT, June 3: This piece was updated to include a quote from Woof & Brew.