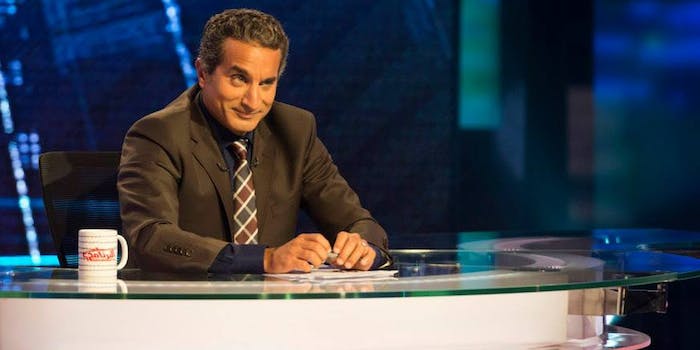 Was ‘Egypt’s Jon Stewart’ kicked off air for angering the military?

Bassem Youssef, the Egyptian satirist known to Western audiences as “Egypt’s Jon Stewart,” was banned from going on air to host his Friday show, the BBC reported.

Youssef, who began his career as a popular YouTube-based satirist after the 2011 Egyptian revolution, launched his current program El Barnameg (“The Program”) after being inspired by Jon Stewart’s The Daily Show. Both hosts have appeared on each other’s shows numerous times.

The CBC has not detailed what policies Youssef violated. Many are wondering if this isn’t a backlash against Youssef, who recently poked fun at General Abdel Fattah al-Sisi, the Egyptian military’s commander-in-chief and the leader of the 2013 military coup.

“The controversial presenter joked about chocolate bars being made in the image of the general,” the BBC reported. Complaints were made by viewers and an official investigation was launched before the network cancelled the show.

Youssef’s program has been through these issues before. Just this year, the host was arrested and released on bail for allegedly insulting both Islam and President Mohammed Morsi. In April, a lawsuit to ban his show was rejected.