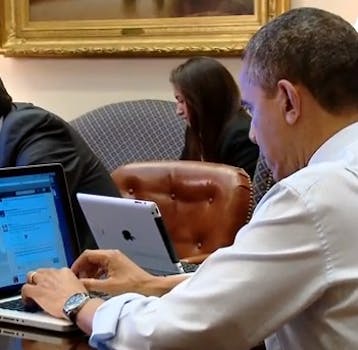 @BarackObama is not who you think he is

You probably know that the president of the United States doesn’t run his own Twitter account, but it turns out that President Obama’s campaign staff doesn’t control @BarackObama anymore, either.

In January, Obama’s campaign team handed over control of the Twitter account, one of the most widely followed on the planet, to a nonprofit group called Organizing for Action. That entity has taken over most of Obama’s campaign material, including the website, social networking accounts and even the “OFA” (Obama for America) acronym, according to the Atlantic.

What’s particularly interesting is that Organizing for Action cannot advocate for a political candidate due to its nonprofit status under IRS code. That seems a somewhat odd move when it’s so closely tied to Obama’s identity. However, the group can advocate for issues, meaning that it can, for instance, urge voters in a particular state or district to urge elected officials to vote in a certain way, whether through mailings or tweets. Organizing for Action denotes itself as a nonpartisan body that has no official relationship with Obama.

As the Atlantic points out, pleas for action appearing on the @BarackObama account may make it seem as though Obama is advocating for a certain issue to his nearly 30 million followers, even though he may not be.

It’s not quite clear exactly why the transition was made (though the Atlantic notes Organizing for Action can legally raise “scads of money”). There’s one other key question to be answered: what will happen when Obama wants to take over the account so he can use it personally after Inauguration Day 2017? It seems somewhat odd that he might have to start from scratch as @TheRealBarackObama.