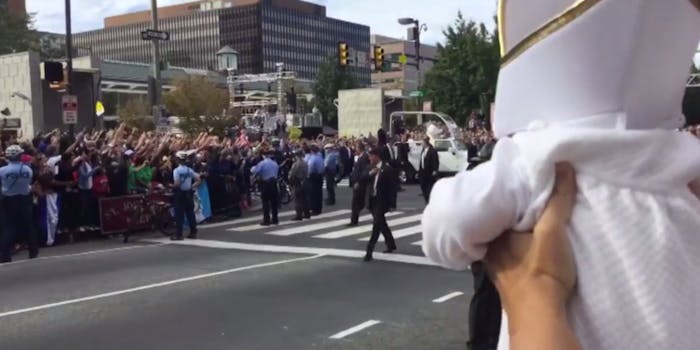 Well, she's got her Halloween costume down.

Pope Francis has seen and done quite a bit during his weeklong tour of the States: He’s subtweeted Congress, talked about climate change, and yesterday in Philadelphia, he met a baby Pope.

Dana and Daniel Madden dressed their baby girl, Quinn, in a tiny Pope costume and managed to get Pope Francis’s attention as he drove by during Saturday’s parade. And then, the moment every parent waits for: Quinn was handed to the Pope’s security, after Francis saw the baby and cracked up.

But what did the Pope whisper in the security guard’s ear? Daniel told ABC 6 that “He told his security guard to tell us that we have a great sense of humor.”