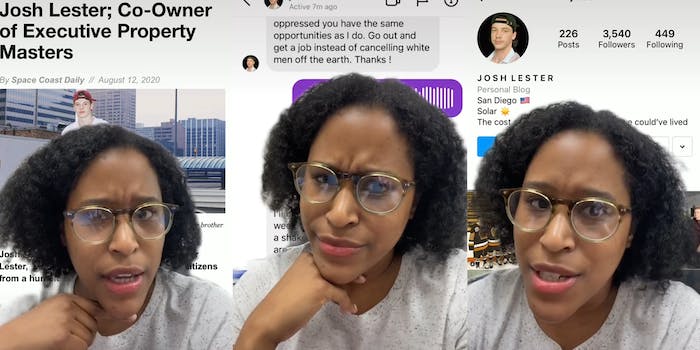 TikToker Aunt Karen knows exactly why he has a problem with her content.

In the TikTok, which now has more than 1 million views, Aunt Karen explains she’d recently been messaged by someone named Josh Lester, who, according to several articles published last year, is co-owner and CEO of Exclusive Property Masters, a Calgary-based sales company. But he did not want to talk business. Instead, he apparently unloaded some racist comments about her followers being “left on unemployment” and not being “high status intelligent people.” He also made transphobic comments.

In the messages, which are partially posted in the TikTok, Lester tells her to “Go out and get a job instead of cancelling [sic] white men off the earth.” When challenged with the fact that racism is very real, Lester claims that it “slightly exists” but that “black people are the most racist people on this planet.” There were also voice messages from Lester urging her to “go out and make a million fucking dollars so you can actually do something good with this world,” something millionaires are notorious for doing.

Aunt Karen tells the Daily Dot these messages came out of the blue: “His comments primarily pertained to my content and how I seemed to cancel white people. He never brought up any other TikTok creator.” Lester’s social media accounts have since disappeared.

Lester was the subject of a handful of complimentary profiles last summer, which all were published around the same time. But if you do a deeper reading you’ll see many of them are really just glorified press releases, likely paid for. (The Forbes article referenced in the follow-up TikTok has a disclaimer at the bottom stating that “No Forbes India journalist was involved in the writing and production of this article.”)

This profile claims Lester became co-owner of the company in 2020, at just 19, and that it was previously owned by his older brother, though there’s no clear description of what the company actually does. The profile also includes this detail about his salespeople: “He pays them $1000 a day, in return for working for 90-100 hours a week.”

Before his Instagram disappeared, his location was listed as San Diego, and he had “Solar” in his bio. A now-deleted LinkedIn profile listed Tampa as his location. “Lmfao CEO of a company ok. So he’s throwing Fyrefest 2021,” said one commenter, echoing other comments about him possibly running a scam business.

“I get a lot of DMs,” Aunt Karen says. “Most people are seeking to help expose racism and bring it to the light. Very few are like Josh. But his stood out the most, as he is a white male who couldn’t stand my work for no other reason than racism.”

Aunt Karen says the “goal” of her work on TikTok is not just to expose people but to show how deeply ingrained racism is: “We often deny the hate because we can’t see it, but when it’s in our face, it’s harder to deny.”