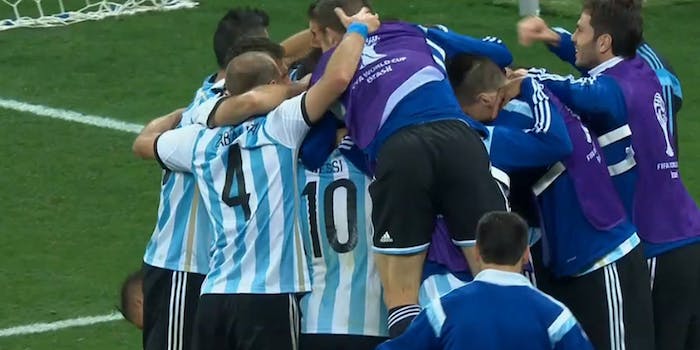 For only the fifth time ever, a World Cup semifinal was decided on penalty kicks.

Sunday’s World Cup final will be a rematch of Italy ‘90, wherein Germany bested Diego Maradona’s Argentina for the title. For the first time since 1998, and only the fifth time ever, a World Cup semifinal was decided in penalty kicks Wednesday night in Sao Paulo. It was also the first ever semifinal to go 120 minutes without a score. Argentina is now 4-1 in World Cup penalty shootouts.

But for now, expect a Sergio “Chiquito” Romero statue to be erected in Buenos Aires.

The Argentine keeper set the tone of the shootout with stops against Dutch icons, and planted a flag on Argentina’s independence day to send his country through in an emotional, fingers-trembling-at-the-keyboard semi.

Dutch coach Louis Van Gaal, who tactically led the Dutch through the tournament with brilliant, oddball moves, burned his three subs in regulation and wasn’t able to bring on penalty specialist Tim Krul after extra time.

It was by and large a patient, intentionally slow march toward a moment—through 60 minutes no game had produced less shots on goal at this World Cup. Seventy-two minutes came and went before Dutch stars Arjen Robben or Robin Van Persie even made a shot on goal, or even before the Netherlands took a shot in the penalty area. Possession remained more or less even, both sides hesitant to jump at chances to play forward, and elbow-clearing with chippy, physical play. The rainy slop that poured down early in the second half sparked more conservative movement.

Even the set pieces were banana peels save for a 14-minute meat and potatoes, fastball-down-the-middle strike from Lionel Messi that sailed on target into Netherlands keeper Jasper Cillessen’s gloves. In the 49th, Wesley Sneijder sailed a set piece into the bleachers. Argentina returned the favor with the same charitable touch in the 72nd.

Gonzalo Higuain scored in the 73rd, but was incorrectly ruled offsides—the fiery Argentines were too wiped to complain much. The Dutch waited until the 90th minute to make a strong charge, but Robben’s movement was sniffed out by the Argentine backline.

Before the game, both sides paid pregame tribute to Real Madrid legend, Alfredo Di Stefano, who passed away Monday. Argentina donned black armbands in memoriam during the game.

The semi’s greatest controversy and side show came early on, when Javier Mascherano clanked his head mid-air and appeared concussed. American football fans are used to concussion headlines, but even in the often-irresponsible NFL players never continue without a firm diagnosis, and post-concussion return is strictly prohibited. Not at the World Cup.

@SoccerByIves “How many fingers are I holding up?” “Thursday.” “He’s ok.”

At least Mascherano was brilliant.

The semifinal proved an exhausting evening in and could prove consequential. A fresh, surging German side awaits Sunday on an extra day’s rest.