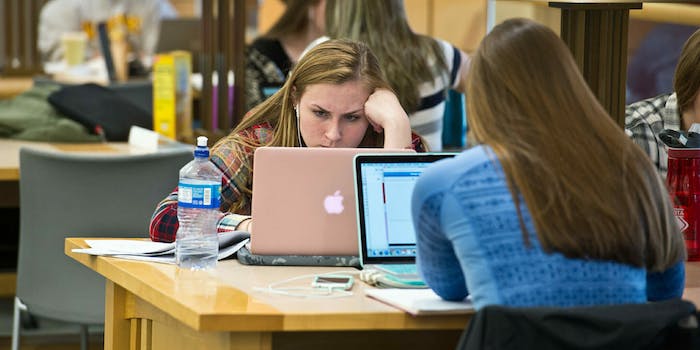 These kids are 'apushing' out some memes.

Tomorrow is the final day of Advanced Placement English Literature and Composition (APLIT) and Advanced Placement United States History (APUSH) exams for high school students. The courses are designed to mimic a class a student might take as a college freshman, and the final exams take over three hours. As you might imagine, this has led to some stressed out teenagers.

And what better way to vent that frustration than filling up Twitter with a bunch #APUSH and #APLIT memes?

A lot of the tweets are students worrying about how they did, with everyone hoping for a 5 (the best possible score) but thinking they might have gotten a 1.

me laughing at the #apush memes knowing I definitely got a one on the exam #apushexam pic.twitter.com/iTDvr00yNU

rt this picture of franklin d. roosevelt for a 5 on your apush exam pic.twitter.com/Lqj3Ik5UCI

when the essay asks you about the economy but all you studied for was women rights #apush pic.twitter.com/zowiwtfl2M

This better get me a 5 on the APUSH exam pic.twitter.com/XpRtO9DndZ

My 2 essays were weaker than the Articles of Confederation #APUSH

Other students chose to focus on what they learned.

writing about literally anything in apush #apush pic.twitter.com/SsG7aZ5SS8

the #APUSH exam topics but without context pic.twitter.com/mREANMgzEx

Apparently the APLIT exam covered poetry by Jamaican writer Olive Senior, and whatever she wrote about plants is freaking kids out.

woke: flowers are militant colonizers with an imperialist agenda#aplit

Me from now on every time I see a plant#aplit pic.twitter.com/FnRYoA48GO

Although many saw the poem as an analogy for colonialism, the author didn’t necessarily see it that way. She did however indicate that she was open to that interpretation.

I really just busted out five fat pages on the frequently unobserved surrounding influence of plant life only to find out olive senior's poem was about white colonization #aplit pic.twitter.com/5rmIzaBstd

I don’t hate plants. Quite the opposite. My poem shows how clever plants are in devising so many methods for ensuring their survival. Read again.

Not really. But in the poem plant activities are related to the human. So you can see parallels. Not everything in the poem is revealed to the author. The best poems invite the readers in. Your own interpretation is valid if you can support it with evidence from the poem.

A few students even seemed worried that retweeting memes could get them in trouble. After all, who wouldn’t be a little afraid of something called “The Office of Integrity”?

Office of integrity the next day: pic.twitter.com/jOcgKEGale

Me walking into the Office of Integrity with all the other people who tweeted #APUSH memes pic.twitter.com/CLKjyuENOY

Even exhausted teachers were taking to Twitter to express their feelings about the exams.

If my students spent as much time analyzing poetry as they did analyzing "Yanny vs. Laurel" imagine the class I could have. #aplit #teacherproblems

These kids shouldn’t be too worried about the exams, or even getting into college. Given the historic rates of student loan debt, and the possibility of finding a good job in their field after finishing college, they might be better off concentrating on creating more memes. That’s an economy you can always count on.