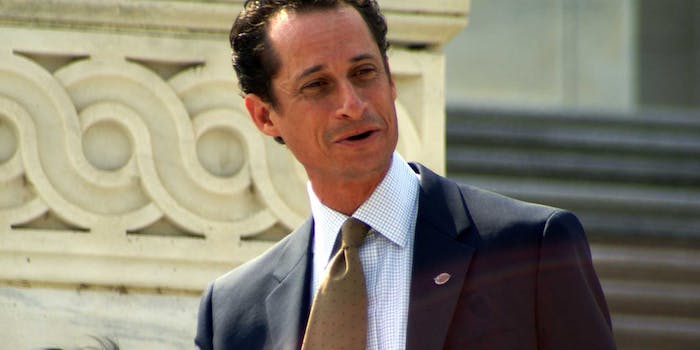 Former congressman Anthony Weiner—who, you may remember, resigned from Congress and lost a New York City mayoral bid after a long and excruciating saga involving prurient pics and sexually explicit text messages—set Twitter aflutter today when he “accidentally” favorited a tweet about sexting.

The tweet in question was sent out by Vox writer Matt Yglesias, linking to a piece on hookup app Tinder‘s recent decision to add in a Snapchat-like photo sharing feature. The headline: “Tinder’s new feature makes it the ultimate sext machine.”

Tinder will now be the ultimate sext machine: https://t.co/foontgR4Zc

Buzzfeed managed to capture a few screengrabs of the endorsement before the erstwhile politician (now writing about sports for Business Insider) scrubbed his account of favorites. In a note to Buzzfeed, Weiner said, ““there were a bunch of favorites there that I didn’t either didn’t recognize or mean to favorite. im [sic] not clear on how they got marked in the first place but I assume hit the little star thing accidentally as I scrolled through stuff.”

Naturally, the incident prompted a renewed round of media intrigue; it also gave us the brilliant New York Post headline, “Weiner pulls another Twitter boner.”

Weiner addressed the hubbub with a few tweets of his own:

In related news, I did buy 1000 shares of Tinder stock.

Ok, to recap my day. I accidentally hit the star thingy on a @voxdotcom story about Tinder. Sorry.

Would it be too exploitative to direct everyone to my @businessinsider column? Yeah, I suppose.

Until next time, Carlos Danger!