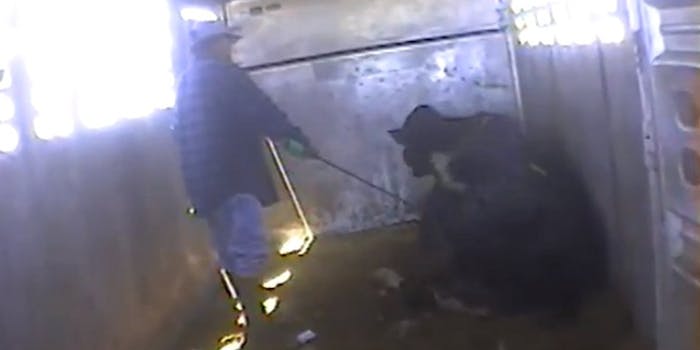 Warning: The following video is graphic and not safe for work.

Operations at a Central California slaughterhouse have been suspended indefinitely after an animal welfare group forwarded a video to officials at the United States Department of Agriculture which they claim shows cattle being treated inhumanely at the meat processing plant.

Compassion Over Killing, which obtained the footage through undercover work conducted in June and July of this year, points to particularly disturbing scenes depicting employees kicking and shocking cows.

“We have reviewed the video and determined that while some of the footage provided shows unacceptable treatment of cattle, it does not show anything that would compromise food safety,” said Al Almanza of the USDA’s Food Safety and Inspection Service.

A team of investigators has been sent to the Hanford-based Central Valley Meat Co. to investigate the matter further.

Plant president, Brian Coelho, said in a statement that the company was “extremely disturbed to be informed” that USDA inspection was suspended over “a videotape that was provided to the department by a third party group that alleged inhumane treatment of animals on our property.”

Still, he insisted that Central Valley was cooperating with federal investigators, and added that an “animal welfare expert” will be brought in to conduct an independent investigation.

One of the meat supplier’s largest clients, the California-based In-N-Out Burger, said it immediately moved to “sever” its ties with the company upon learning of the situation.

Central Valley beef accounts for approximate 20% of all beef used by the cult burger chain in a given week.