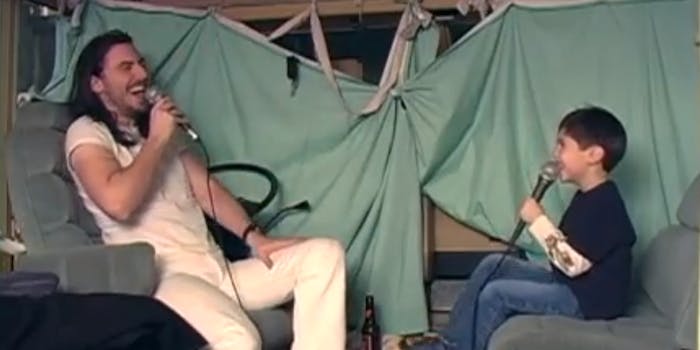 Andrew W.K. was once interviewed by an adorable 7-year-old child

Even the most aggressive ragers have time to speak with the press—especially when the press is an adorable little kid.

Andrew W.K., who parties so hard blood constantly streams down his face, no doubt wants to get down in every situation possible. But even the most aggressive ragers have time to speak with the press—especially when the press is an adorable little kid.

The clip’s a little old, but we just came across it. In Jan. 2010, the beloved New York City musician jumped into the back of a van with a kid named Aiden who couldn’t be more than 7 and answered questions about his third album, Close Calls With Brick Walls, and his newfound involvement with the Cartoon Network’s Destroy Build Destroy.

To be honest, it was all a little creepy.

“The first day of Destry Build Destroy was like a dream come true,” W.K. said to the kid. “Have you ever had a dream before?”

“Have you ever had a nightmare?”

Aiden had had 20 nightmares.

W.K. went on to explain the differences between playing in a rock ’n’ roll band and creating episodes for television before forecasting what Aiden should expect in the show’s coming seasons.

I’ve spent the past seven years interviewing individuals in the music industry and still haven’t yet connected with an interview subject the way Aiden did with W.K. It’s impressive stuff, just maybe not the type of interview that should happen out back of a camper van.