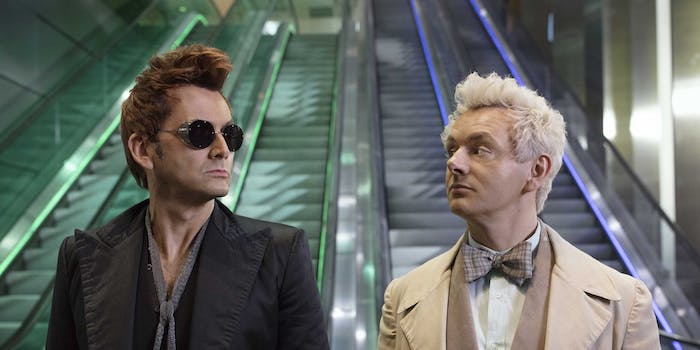 Season 2 will tell new stories about Aziraphale and Crowley.

In a highly unexpected move, Amazon’s Good Omens adaptation is getting a sequel. Since the 2019 minseries covered all the events of the original novel by Terry Pratchett and Neil Gaiman, season 2 will introduce new stories focusing on the angel Aziraphale (Michael Sheen) and the demon Crowley (David Tennant).

In Amazon’s announcement, Neil Gaiman (who will co-write and executive produce the new season) mentions that he and Terry Pratchett used to discuss writing a sequel to their hit novel. But since Pratchett passed away in 2015, that never happened. Now, following the success of the six-episode adaptation, Gaiman has decided to move forward with different collaborators including British comedy writer John Finnemore (a good fit for the material) and season 1’s co-showrunner Douglas Mackinnon.

Published in 1990, the novel already had a passionate fanbase, with various adaptations languishing in development hell for decades. The Amazon series attracted even more fans, particularly invested in the relationship between Aziraphale and Crowley—a co-dependent friendship (and perhaps romance) between a snarky demon and a fussy angel who incompetently try to prevent the apocalypse.

It sounds like season 2 will give those fans exactly what they wanted: a story that focuses even more on Aziraphale and Crowley. The new season will apparently pick up where the original story left off, with Crowley and Aziraphale living together in Soho. They will stumble upon a new mystery that begins with the arrival of an amnesiac angel. As for the original supporting cast, it’s unclear whether any of them will reprise their roles.