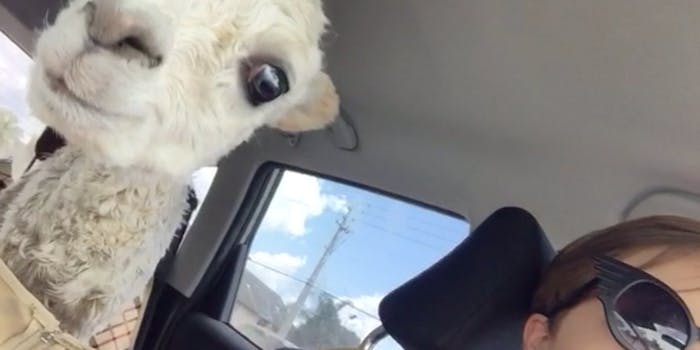 This whining alpaca is a truly terrible backseat driver

Backseat drivers can be a real pain. Whether they’re screaming at you to take a different route or scrutinizing your hand position on the steering wheel, there’s no way to win with them. Unless that annoying voice in your ear happens to be an adorable alpaca.

Tumblr user theadventuresofwatson regularly shares charming selfies with her various hoofed friends, alpacas and baby goats. This past week she posted a video of her driving fluffy Darwin around town.

She explains in another video caption, “He spends his days with his herd, but in the evenings he comes home with me. However, he is not a big fan of the short car ride between my house and my office (where his herd is located) and he complains the entire ride.”

Oh and FYI, he’s not that fond of Christina Aguilera either. Or is he just trying to hum along?

Either way, put a seat belt on, Darwin! You can’t be making such a fuss if you aren’t going to follow simple car safety.