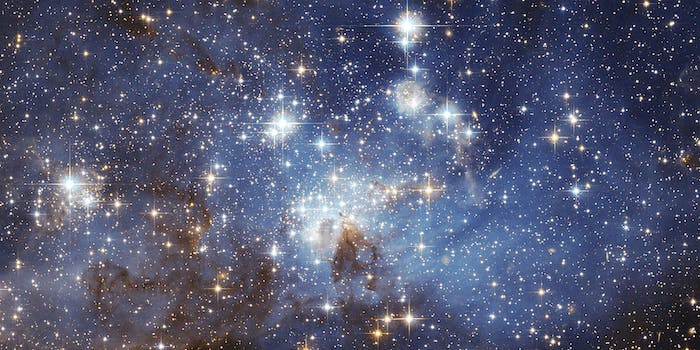 Where is President Alf when we need him?

Earlier this week, the media wound itself into a tizzy reporting on the discovery of an unexplained mass of objects swirling around a distant star. Looking at light patterns emitted from the star, which is named KIC 8462852, the scientists speculate that the structures could be artificial in nature.

Yup, aliens. Or, rather, maybe aliens—because the entire issue of precisely what’s going on with KIC 8462852 requires a lot more analysis before assumptions can be put forth with anything approaching certainty.

Nevertheless, if alien life were discovered, it would send shockwaves across the world’s governments, requiring a massive realignment in the way all human relations are conceived. In the U.S., politicians would probably just use it as an excuse to say the same old stuff they’ve already been saying for years.

“We need to deport every single illegal alien on this planet to ensure they don’t take jobs from hardworking humans, spread space madness, and rape our women—assuming the aliens don’t reproduce asexually. Yes, I was talking about aliens from outer space this whole time. I was saying we should build a wall around the Earth’s atmosphere to keep their flying saucers out. You all thought I was talking about human beings from Latin America? Oh wow, no wonder everyone thought I was a racist. I would never say any of that stuff about another human being regardless of their country of origin. I’m sure glad we got that all cleared up. Now, who wants cake?”

“Some may see our first contact with aliens as a threat. I see it as an opportunity. When I was first lady, I took the initiative to reach out to the aliens and begin work on a groundbreaking collaboration between our two species. Back in the 1990s, when a pair of meddling FBI agents started poking into our efforts breeding a race of alien-human hybrids that maybe somehow involved bees—my memory is a little hazy on the exact specifics of what happened, especially in the later seasons—but what’s important here is that we should all welcome our new alien overlords.”

“We have a sickness in this galaxy and its name is inequality. These aliens possess technologies so advanced they are, to our eyes, indistinguishable from magic; yet the American middle class hasn’t seen real wages increase since the 1970s. Why is it that only 1 percent of the beings in the universe can go 99 percent of the speed of light? I say, it’s time for these aliens, whose existence I only just learned about, to pay their fair share.”

No one sings along.

“I don’t know, guys. Just tell me what you want me to say. Trump, Carson, Fiorina, all of those clowns who are beating me in the polls right now are just going to try to immediately blow up the aliens and get us all killed in the process. I won’t do that, I promise. I’ll try really hard not to be solely responsible for the extinction of the human race. Is that what you want to hear? If it is, then I’m your man. It’s not what you want to hear? You want someone who will pledge to show those aliens how tough we are by detonating a nuclear bomb right in the big, dumb faces? Do you know if it’s even possible to detonate a nuclear bomb in open space? You don’t care. Fine. Whatever. I’ll do that. If that’s what you want, I’ll do that.”

“I will blow up all the aliens because I have the hard-as-steel nerves of a brain surgeon.”

“I will blow up all the aliens because I have the hard-as-steel nerves of someone who used to tell other people how to make printers.”

“Good morning. In less than an hour, aircraft from here will join others from around the world and you will be launching the largest aerial battle in the history of mankind. Mankind. That word should have new meaning for all of us today. We can’t be consumed by our petty differences anymore. We will be united in our common interests. Perhaps it’s fate that today is the Fourth of July, and you will once again be fighting for our freedom. Not from tyranny, oppression, or persecution but from annihilation. We are fighting for our right to live. To exist. And should we win the day, the Fourth of July will no longer be known as an American holiday, but as the day the world declared in one voice: We will not go quietly into the night. We will not vanish without a fight. We’re going to live on. We’re going to survive. Today we celebrate our Independence Day!”

“Yes, I am still running for president. Thank you for asking.”

“Look, I’m almost done being president. This whole aliens thing is clearly a very big deal, I get that. I do. But, listen, maybe we can just put dealing with it on hold until the next administration is sworn in. That star we found is light years away, they’re not getting here any time soon. It seems like a whole lot of work and I’m just trying to keep my head above water between ISIS and the debt ceiling and I just started binge-watching American Horror Story on Netflix. It’s just… a lot… you know?

Photo via  ESA/Hubble/Wikimedia Commons (CC BY 3.0)