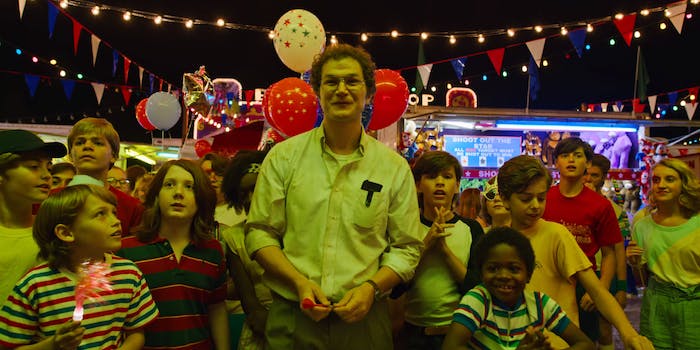 Alexei was so pure.

The third season of Netflix’s Stranger Things arrived on July 4. Nearly a week later, fans are still making memes of their favorite moments—and characters—from the show.

The dominant meme reared its head early on. Early in the season, new addition Robin (Maya Hawke) created the perfect meme template with her mocking whiteboard. The online hordes made quick work of the low-hanging fruit in the first days after season 3’s release.

The template has taken on a Confession Bear style, with many people using it to point out theories or aspects of the show that stood out to them.”Billy is a lifeguard bc water reminds him of surfing which reminds him of his mom,” one meme reads. “Its [sic] comforting.”

The Subconscious from StrangerThings

Thoughts on the future of the show from StrangerThings

Now this is what I call a dream job from StrangerThings

Within no time, the Robin whiteboard memes were overtaken by love for one of the season’s most unfortunate characters, Alexei. A Russian scientist forced to work on the gate-opening device beneath the Starcourt Mall, Alexei became a fan favorite moments after he appeared onscreen. His charming personality and sweet smile guaranteed his status as an instant icon. His best moments—from the cherry Slurpee to his chemistry with Murray—were quickly immortalized through memes.

Many people couldn’t stop thinking about Alexei after his tragic death granted him entry into the “they deserved better” club, along with Barb and Bob from the previous two seasons.

#StrangerThings
nobody:
still nobody:
me: ALEXEI WAS A PURE BABY WHO WAS SCARED AND JUST WANTED TO WATCH LOONEY TUNES AND DRINK CHERRY SLURPEES. WHY COULDN’T THEY LET HIM BE HAPPY AND EAT CORNDOGS WITH MURRAY WHY??! HE DESERVED HAPPINESS AND HAPPINESS ONLY pic.twitter.com/gSVp1volUu

[SPOILERS] They did my boy dirty. from StrangerThings

Other people just couldn’t get over how damn cute he was. We miss you, Alexei.

#StrangerThings
Hopper: this is the most dangerous criminal in the world

Best boy.
Who else hhas seen #StrangerThings ??
I suggest you do if you havent yet pic.twitter.com/pGwM438U5w

After all the love started flooding social media, the actor portraying Alexei, Alec Utgoff, took to Instagram to thank his new fans. “Thank you everyone for your warm welcome and support,” he wrote. “I was really touched that you enjoyed our arc and resonated with the character.” His words pretty much proved that Utgoff is just as wholesome as the character he played on screen.

Even though it will be notably lacking in all things Alexei, we already can’t wait for Stranger Things season 4.