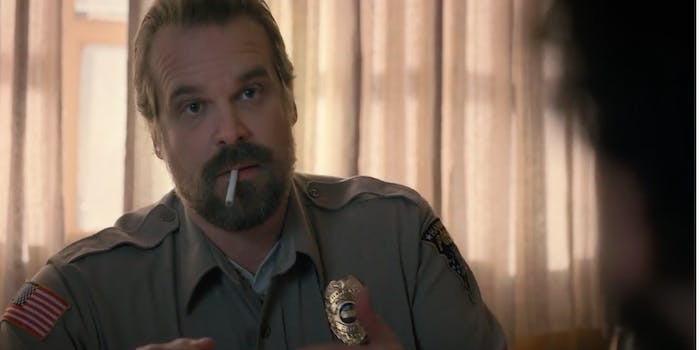 Netflix set to lay off the smoking, Chief Hopper likely the one to blame

No word on how this will affect 'Russian Doll' yet.

Netflix announced that its originals will feature less smoking following backlash regarding the amount seen in Stranger Things.

The originals–rated TV-14 and PG-13 and below–will no longer feature smoking or e-cigarette use unless it is “historically” or “factually” vital to the story. Netflix will also try to cut back on depictions of smoking in its more adult content, but ultimately adhere to its artists’ creative visions. No word on how this will affect Russian Doll yet.

“Netflix strongly supports artistic expression,” a Netflix spokesman told Variety in a statement. “We also recognize that smoking is harmful and when portrayed positively on screen can adversely influence young people.”

The streaming giant is also set to provide smoking disclaimers in its ratings.

Truth Initiative, an anti-tobacco nonprofit, released a report–only a few days prior to the Stranger Things 3 release–alleging that Stranger Thing 2 had 262 depictions of smoking, while its former season only had 182. Chief Jim Hopper, played by David Harbour, can be constantly seen lighting it up in the series.

The report claims that other popular shows such as Unbreakable Kimmy Schmidt, Orange is the New Black, and House of Cards also depicted more and more smoking as the seasons wore on. This was especially distressing to the group considering it found all the shows to be highly popular among individuals within the 15-24 age range.

The report didn’t just call out Netflix. Amazon Prime Video’s The Marvelous Mrs. Maisel and Hulu’s Gap Year were also cited among the most popular shows in that age range which heavily depict smoking.