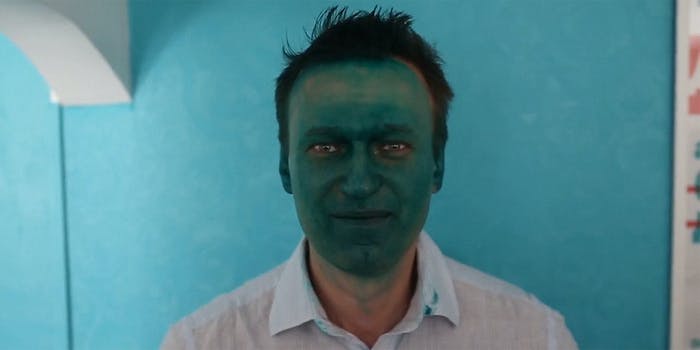 Putin critic Alexei Navalny had green paint thrown in his face, and it’s really working for him

Alexei Navalny isn't the first Putin critic to be doused in green paint, but he might be the first to turn it to his advantage.

When a man in Siberia walked up to him and threw a green liquid in his face, Alexei Navalny feared it might be acid. When he learned it was only green paint (or possibly ink) not only was he relieved, he saw it as a perfect opportunity for free publicity.

Navalny is a Russian politician, and an outspoken critic of corruption in the Russian government in general, and of President Vladimir Putin specifically. He’s led massive protests in the past several years and has been a major thorn in the Kremlin’s side.

The same day he was coated in the green substance, Navalny recorded this message and posted it to YouTube.

In the video he seems to imply that the Kremlin is behind the attack. He also makes sure to let them know it won’t slow him down. In fact he feels his new green face will only help him stand out: On Twitter, he compares himself to the Mask.

Dear God we hope he means the original Jim Carrey movie, and not the horrible sequel with Jamie Kennedy.

He then invites everyone to attend anti-corruption rallies that will be taking place all across Russia on March 26. Navalny will be there, green face and all—apparently this stuff takes some time get rid of—and it seems some of his supporters will be following suit.

Why are people in Moscow painting their faces green in solidarity w/ opposition leader Alexei @Navalny? This is why: https://t.co/Siy62havz8 pic.twitter.com/iY9VhSdO0Y

People were also quick to weigh in with favorable comparisons and even some marketing ideas.

This, by the way, is not the first time one Putin’s critics has been attacked in this fashion. On Feb. 26 former Russian Prime Minister Mikhail Kasyanov was part of a march to commemorate the assassination of Boris Nemtsov, when a man threw green ink in his face. Below you can see the man being detained by police while Nemtsov wipes away the ink.

Regardless of whether or not you agree with Navalny’s politics, you have to admire his ability to take an intended insult and turn it to his advantage. And let’s be honest, the color really does make his eyes pop.