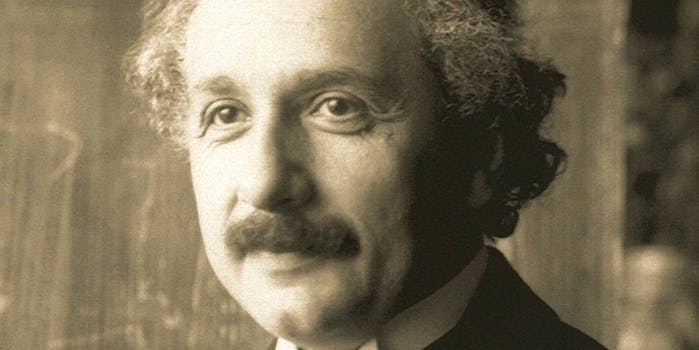 Einstein is one of many celebrities tweeting from beyond the grave.

Albert Einstein once famously said, “Our task must be to free ourselves by widening our circle of compassion to embrace all living creatures and the whole of nature and its beauty.”

More recently he said, “It’s the end of the work day. Leave work like a boss. #TGIF #Einstein”

It's the end of the work day. Leave work like a boss. #TGIF #Einstein pic.twitter.com/j0uH7gmIzX

Even though he died in 1955, Einstein started steadily pumping out tweets in 2013, and he’s not the only one. Elvis Presley, Marilyn Monroe, and John Lennon all have verified accounts on Twitter, despite having been dead since long before its invention.

Twitter first started offering “verified” accounts to users back in June of 2009, after being sued by St. Louis Cardinals manager Tony La Russa. An imposter account, attributed to La Russa, had tweeted “Lost 2 out of 3, but we made it out of Chicago without one drunk driving incident or dead pitcher…,” a reference to La Russa’s 2007 DUI arrest and the 2002 death of pitcher Darryl Kile. La Russa, was not amused.

In an official blog post titled “Not Playing Ball” Twitter called the lawsuit “…an unnecessary waste of judicial resources bordering on frivolous…” The suit was eventually dropped, but its legacy, the verified Twitter account, is with us to this day.

According to Twitter’s FAQ, “Verification is currently used to establish authenticity of identities of key individuals and brands on Twitter”

Since Elvis, Albert, and Marilyn are no longer amongst the living, does that mean Twitter considers them to be brands? Given that most of these accounts seem geared towards pushing products, that’s a logical conclusion. After all, if Martin Guitar releases a new guitar that’s one thing, but if it’s endorsed by John Lennon—even a long since deceased John Lennon—well, that’s certainly not going to hurt sales.

Einstein’s Twitter is owned by Corbis Entertainment—a company that, according to their website, provides “…global end-to-end solution for brands and agencies to build groundbreaking, results-driven programs in partnership with Hollywood content, celebrities, music and sports.” You know, just like Einstein always dreamed.

This continued “verification” of people who aren’t the people they’re verified to be isn’t even limited to citizens of the afterlife. According to Pitchfork, Morrissey was none too happy to find that his old band The Smiths have an official Twitter account run by Warner Bros.

Twitter doesn’t accept requests for verification from the general public, and it offers this advice for users hoping to have their accounts verified:

If you think you meet the criteria for verification and have not yet received a badge, please be patient. We are working within key interest areas to verify accounts that are sought after by other Twitter users. We don’t accept verification requests from the general public, but we encourage you to continue using Twitter in a meaningful way, and you may be verified in the future. Please note that follower count is not a factor in determining whether an account meets our criteria for verification.

But if you’re in a real hurry, there’s another, perhaps quicker, path to getting a verified Twitter account: Try dying while there’s still money to be made.