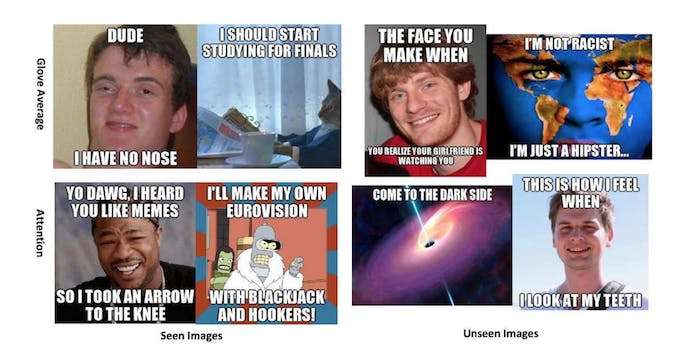 People thought these AI memes were kind of funny!

Abel L. Peirson V and E. Meltem Tolunay, the authors of a paper published on June 8, only used the photo-with-caption style of memes to keep the project simple. They used an Inception-v3 network “to return an image embedding which is passed to an attention-based deep-layer LSTM model producing the caption—inspired by the widely recognized Show and Tell Model.” Show and Tell is a machine learning system that produces captions for photos.

How do the researchers know that people can’t tell if the memes were generated by a computer or a teen on Reddit? Well, they actually polled real humans:

For our final test we show 20 different memes to 5 people from diverse backgrounds and note if they can differentiate them from real (training set) memes of the same format and random text generated memes. The same people also ranked the memes being shown on how funny they found them on a scale of 0-10.

The real memes scored around a 7.0 on the humor scale, while the AI-created memes weren’t far behind with scores between 5.5 and 6.8 (tough crowd).

Here are some examples of memes generated using their models:

Whether anyone would share any of these AI memes—or if they would get any traction online—is a whole other topic. But it’s impressive (and a little bit scary) that a neural network can generate a mass quantity of memes and trick people into thinking that they are real. Just last month, another study on memes was released, but it focused on toxic and “weaponized” memes that are used for propaganda. That study looked at how people created and shared memes on four websites. And, not surprisingly, many of the popular memes on two of the sites were racist and political memes.

The paper on the AI-generated memes ended on this grim conclusion: “Lastly we note that there was a bias in the dataset towards expletive, racist and sexist memes, so yet another possibility for future work would be to address this bias.”

Hopefully, people who create memes can work on addressing that issue as well.

H/T: The Next Web