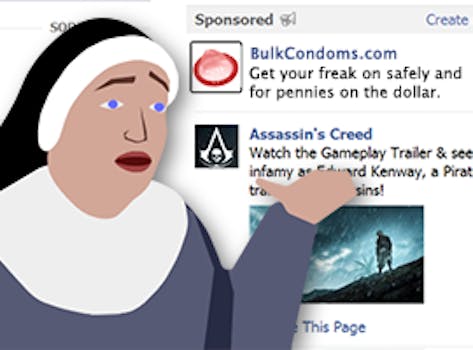 OK, so we have to have ads. But do they have to be such weird ads?

What the hell is wrong with Facebook’s sponsored-page algorithms?

I know, I know. The company needs to make money somehow; I’m not complaining about the mere existence of sponsored posts, sponsored pages, Facebook ads, etc etc. But they won’t put money into Facebook’s coffers unless people actually click on them, which is why I ask again: what the hell is wrong with those algorithms? Here’s a hint: I’m not going to join any politically based Facebook groups whose principles contradict my own.

Let’s take just one annoying yet timely example. Everything I’ve ever written on the subject of gay marriage—whether a casual Facebook comment, blog post linked to same or an actual professional journalism piece—makes it pretty obvious I’m 100% pro-equality. So why has Facebook spent this past weekend polluting my News Feed with sponsored posts urging me to support one of those vile anti-gay-marriage groups with the word “Family” in the title? They may as well offer condoms to nuns, for all the response they’re likely to get.

I first started noticing these mismatched posts back in January, when Facebook suddenly decided any fan of Rush the classic prog rock band must like Rush the Limbaugh, too. Of course. They’re a match made in heaven, especially if you’ve never heard of “context” and how it can grant the same word different meanings in the phrases “Rush Limbaugh,” “rush hour traffic,” “head rush” and “that kickass band Rush is Canada’s greatest-ever gift to the world.”

So Facebook kept cluttering my News Feed with recommended stories about the Limbaugh’s latest trolling utterances, right next to pictures of the little avatar from the prog band’s fan page. When I posted a snarky complaint about this on Facebook, a friend of mine commiserated: he “likes” the British sci-fi show Doctor Who, and thus got recommended news articles about some drug scandal in the world of European competitive bicycling—because, he guessed, the stories mentioned a doctor who allegedly covered up doping allegations.

Facebook eventually refined its algorithms enough that it’s been several weeks since I’ve seen a Limbaugh-based recommendation. But these anti-gay “Family” suggestions are even worse. 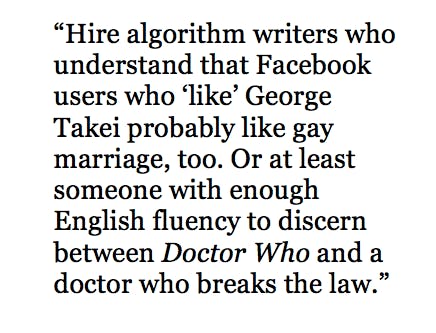 I’m guessing the algorithm looks not at your own personal posts and comments, but whatever content appears in your News Feed. So when Facebook gives center stage to the news that my elderly Great-Uncle Jackhole now likes “Leviticus” and “Adam and Eve NOT Steve NEVER Steve Dammit,” the sponsored-page algorithm figures I must like such things too.  Because when you’re Facebook friends with someone, that means you think the same things they think, right?

The algorithms think so. They started showing me ads for both wedding planners and divorce lawyers almost immediately after I changed my relationship status to “married” last July (a traditional quickie hetero courthouse wedding, for health-insurance purposes). I don’t take the divorce ads personally, given modern divorce rates (which are sure to rise even higher once The Gays threaten my traditional marriage as Uncle Jackhole says they will); what I don’t understand is why Facebook is urging me to visit a divorce attorney at the same time it suggests I should “like” a sponsored, spam-riddled page called, “I Love My Husband.”

I do indeed love the guy (independent of his health insurance benefits) but I’m not going to “like” any damned Facebook page announcing this, anymore than I’d “like” Facebook groups called “I Meet Accepted Minimum Standards of Personal Hygiene” or “I Think Beating up Little Kids and Stealing their Lunch Money is Wrong.” I expect my friends to know such things about me already, same way I expect Hillary Clinton’s friends to know her husband used to be president.

But I can’t fault Facebook’s algorithms for its ads and suggested pages regarding the state of my marriage. Those anti-gay posts it keeps suggesting, though … seriously, Facebook, if you’re trying to monetize the vast quantities of personal information you gather from users like me, you’re doing it wrong. Hire algorithm writers who understand that Facebook users who “like” George Takei probably like gay marriage, too. Or at least someone with enough English fluency to discern between Doctor Who and a doctor who breaks the law.

And here’s a heads-up to avoid future misunderstandings: some of your users are very athletic types who “like” the 5K Run and the 10K Run and the Run for the Cure and whatnot. This does not mean you should offer them sponsored posts about diarrhea, no matter how much they like the runs.