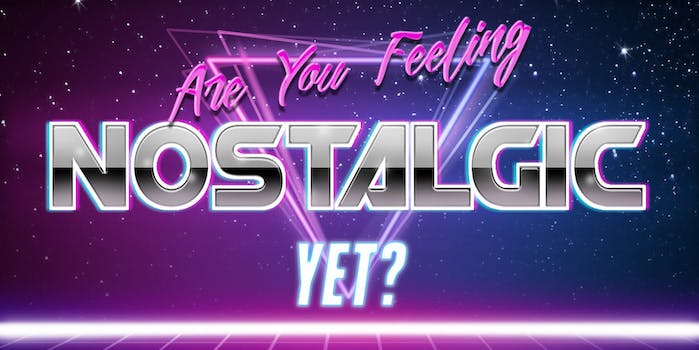 Put your weirdest ideas and references into a retro lasergrid, for some reason.

It’s a retro cousin to the “aesthetics” design movement that goes with Vaporwave music and Tumblr—which also loves grids and purple hues, albeit softer, more “chill” ones.

There are hundreds of these messages floating around, and many of them are abjectly weird, kind of funny, or just references to other memes.

“Max you have this whole hour to invest in improve your job skills”
“Okay.” pic.twitter.com/AzJM0bh3VQ

mate some advice for ya @dril pic.twitter.com/W0fvmYYgLN

So, yeah, that’s happening. It’s happening to the point that people are already sick of it, and it will soon die of overexposure. In fact, it may have died before it ever got big. This tweet is from June:

But if you feel like living out your neon-and-chrome retrowave dreams, just go ahead and do you.

There you go. And if you get bored of this one, the same website is a deep, timesucking rathole of stylized text designs.

But as a reminder, if you look around on that site… pic.twitter.com/Ytt058LH53

So far, none of them has the popular appeal of ’80s neon graffiti, but if the Stranger Things title graphic generator proved anything, it’s… that people love a vintage Stephen King vibe.

But if it proved anything else, it’s that text generators as a form of expression are alive and well, and their meme possibilities are far from exhausted.