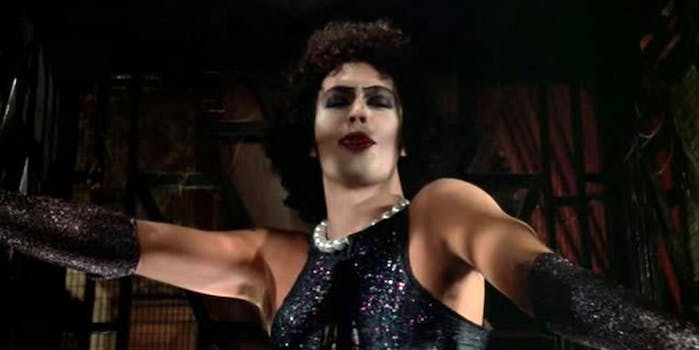 "Do you love RuPaul? How about that Rocky Horror Picture Show?"

This is kind of like someone coming up to you and asking about your vagina or penis. No, wait: it’s exactly like that. While there are some trans folks who are eager to start blabbering away about their nether regions, most of us consider our private parts, you know, private. Go figure.

2) “Do you love RuPaul? How about that Rocky Horror Picture Show?”

It’s important to understand the difference between drag culture and trans reality. The former can be about performance, exaggeration, and entertainment; the latter is about people’s actual lives. Plenty of transgender people have begun their journeys in the drag community, and you will find many trans folks who adore all of the subversive, transgressive energy that drag can bring. But many of are uneasy when our lives are mistaken for “performance,” and it’s disrespectful to trans people to conflate the two.

As for Rocky Horror, here’s another delightful piece of subversive drag culture, made more enjoyably depraved over the years by the legendary participation of its audiences at the film’s midnight screenings. All of that is great. But remember that, while Frank N. Furter sings that he’s a “sweet transvestite from Transylvania,” he’s surely not an actual trans woman any more than Al Jolson in blackface is actually Thurgood Marshall.

3) “So you must love that Judith Butler!”

OK, so plenty of transgender people love Butler‘s groundbreaking work, which has to be respected for the way it brought the term “gender binary” (as in, “reject the gender binary”) into the vernacular (among other good reasons). But there are plenty of us who kind of sigh when we encounter a sentence like “If there is a sexual domain that is excluded from the Symbolic and can potentially expose the Symbolic as hegemonic rather than totalizing in its reach, it must be possible to locate this excluded domain either within or outside that economy and to strategize its intervention in terms of the placement.”

It’s worth remembering that for many trans people, our lives are not a clever academic theory but a daily struggle against violence and a difficult search for dignity and respect. If you’re talking to a trans person, make sure that you are thinking of them as an individual whose fight for identity is real, not as a person whose identity is some kind of scholarly abstraction.

Again, getting kind of personal with this one, aren’t you? Most trans people, post-surgery, are perfectly capable of orgasm, but perhaps it’s understandable if this isn’t the first thing folks want to talk about with a stranger. Author Kate Bornstein, in answering this question, playfully observed, “The plumbing works, and so does the electricity.” So, OK, the answer turns out to be “The Hell Yes.” But whenever someone asks me this question, I think of the story of the guy who kept asking his parrot, “Can you talk? Can you talk?” and at last the parrot says, “Actually, yes, I can talk. Can you fly?”

5. “You know who I feel sorry for? Your children.”

This is a classic way of being judgmental while pretending to be nonjudgmental. As it turns out, most trans people’s children are exactly as screwed-up, or not, as anyone else’s children. But it isn’t having a trans parent that affects children, either for the better or the worse. What damages children is other people treating their families with disrespect.

By which I mean approach a trans person with exactly the same respect and open-heartedness with which you’d approach anyone else. In the same way that you wouldn’t begin a conversation with a stranger by inquiring about their race, their spiritual beliefs, or their politics, you probably wouldn’t want “So you’re transgender?” to be the first words out of your mouth. Many of us would rather not talk about what makes us different, especially with strangers. Many of us would rather talk, at least at first, about the things we have in common.

2) “Do you mind if I talk to you about some gender stuff?”

If you’ve established a rapport with a trans person and feel that the conversation has reached a point where “going there” would be respectful, proceed with caution and see just how willing your new friend is to have at it. Most of us are happy to talk about the issues, at least in a general way, if we think we can do so in an atmosphere that feels safe.

When I first published my memoir, She’s Not There, a dozen years ago, there were precious few books that seemed to address our issues with much subtlety, or with any literary quality; that field was reserved pretty much for Kate Bornstein and her groundbreaking Gender Outlaw. Now there are lots of good books, by authors such as Helen Boyd, Jameson Green, Leslie Feinberg, and, yes, Judith Butler. I published a memoir of being a transgender parent this spring, Stuck in the Middle With You, as well as the updated anniversary edition of She’s Not There, which includes a new epilogue by my wife, Deirdre Grace. Both of those books are available from Random House and other booksellers.

Two other recent standouts include Janet Mock‘s Redefining Realness, the first transition memoir to also address issues of gender theory, not to mention the unique challenges faced by trans people of color like Mock. And the brand-new Trans Bodies/Trans Selves, edited by Laura Erickson-Schroth (and with an introduction by me), is a 600-plus-page resource guide from Oxford University Press, containing information on identity, love, transition, and politics, written by trans people for trans people.

Also, your own Jenny Boylan has just published a new novella, I’ll Give You Something to Cry About (Shebooks). This novella tells the story of the Riley family, traveling from Maine to Washington, D.C., to see their young son perform “The Flight of the Bumblebee” at Ford’s Theatre. But most of the drama focuses on 16-year-old Alex, a teenager who has just gone through transition. This is the first time I’ve written a piece of fiction for adults about trans identity, and I hope readers will find Alex an inspiring character, giving life, humor, and dignity to the experience of trans men and women.

Jennifer Finney Boylan is the author of 13 books, including Stuck in the Middle With You, about the differences between motherhood and fatherhood, and She’s Not There: A Life in Two Genders. Both books are published by Crown/Random House. Boylan, the Anna Quindlen Writer in Residence at Barnard College of Columbia University, is national board co-chair of GLAAD and is a member of the board of trustees of the Kinsey Institute for Research on Sex, Gender, and Reproduction. This article was originally featured in Huffington Post’s Gay Voices section and was reposted with permission.

Photo via ikrichter/Flickr (CC BY 2.0)