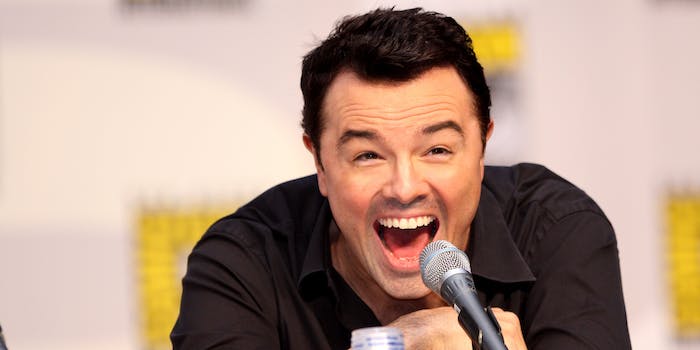 You need to know before you go off and get busy with someone.

Reddit user whatanasssss just discovered that her husband is a vile Internet troll who spends his spare time harassing teenagers on Tumblr. But it gets worse. She’s pregnant. Yes, in a few short months, the chronic harasser of women that she’s married to will become the father of a baby girl. In her disbelief, whatanasssss posted her experience to r/relationships:

[My husband] left the browser open on our laptop after he went to work this morning… I was disgusted at what I found. My husband is a troll. A really fucking nasty troll. He leaves horribly mean comments to all kinds of people. They’re filled with racist slurs, awful insults… I was horrified. Completely horrified. My husband is a nice, gentle man who is supportive and kind. In our 9-year relationship, we’ve fought three times total. I never thought this is a behavior he would take part in.

This woman’s story is horrifying but her situation is by no means uncommon. Unless there’s a secret army of robot bigots out there who have outsmarted every CAPTCHA in existence, it’s pretty clear that Internet harassment comes from actual human men. Yes, cruel online messages are typically typed by fingers which are attached to human arms which are, in turn, attached to the human men that we all, unfortunately, must interact with at some point in our lives.

And they’re not all Mountain Dew-guzzling teenage boys with a budding “nice guy” complex, either. They’re the men that you work with, the men that you’re friends with, the men you’re related to and, yes, maybe even the man whose baby you are carrying. They know how to tie a tie and file an income tax return and that makes them even scarier.

So if this Reddit user’s experience has you rattled, you might want to double-check that the man you swap gametes with one day knows how to behave himself online. That’s why I’ve prepared a quiz for you comprised of five questions that you can ask the man in your life in order to determine the likelihood that he is an Internet troll. I can personally guarantee that this quiz is accurate with absolutely no margin of error, so if your man fails, then #DTMFA and move on.

If you think your boyfriend might be an Internet troll, ask him:

1) “What do you think of Seth MacFarlane?”

Start here. This is the troll-determining equivalent of the “Is it bigger than a breadbox?” question in Twenty Questions. It will quickly allow you to eliminate a wide range of possibilities in one fell swoop. The MacFarlane Query, as I call it, will help you understand what kind of man you’re dealing with and whether or not further inquiries are necessary.

Why Seth MacFarlane? Because Seth MacFarlane is what would happen if you gave your teenage brother $150 million and his own TV show. His brainchild Family Guy is the prize pony of so-called Equal Opportunity Offenders, people who justify being an asshole to minority groups because they are assholes to all of them. That mindset is presumably how MacFarlane convinced himself to squander his one shot at the Oscar-hosting gig by performing a musical number about the breasts of every actress in the audience.

If your man responds to this question with a blistering critique of MacFarlane’s politics, you’re in the clear. If he lights up and shows you his Family Guy box set, you should be worried. Your man has probably been mean to at least one woman on the Internet at some point in his life.

2) “Have you ever heard of Anita Sarkeesian?”

This question is particularly useful if your man is a video gamer and, if your man plays video games, your troll-dar should already be set to high alert anyway. On the Venn Diagram of the Internet, the intersection of trolls and male gamers is a particularly bustling one and there’s no one that male video gamers hate more than Anita Sarkeesian.

Ms. Sarkeesian is a feminist media critic who produces a YouTube web series called Feminist Frequency. In 2012, she successfully crowdfunded a series of videos called Tropes vs. Women in which she critiques the representation of women in video games. But this crowdfunding campaign also made her into a lightning rod for Internet trolls. (If you want to see a sample of the sort of people that harass her, you can read this blog post but, be warned, you’ll see every slur under the sun.)

So if your man is a gamer and you’re worried he might be a troll, try casually dropping her name. Does he instantly begin to foam at the mouth? I’m sorry, but you’re married to a troll. Does he look unusually agitated as he gives you a completely unsolicited twenty-minute long lecture about the harmful objectification of men? He’s probably a troll. Back away slowly. Does he recognize the name and say something that sounds feminist or, at the least, empathetic? You’re in the clear. Go ahead and make a baby with him.

3) “Which amendment in the Bill of Rights do you think is the most important?”

This is a fun question that every couple should ask each other just to build intimacy and to prepare to compete on game shows in the constitutional originalist dystopian future of my nightmares. Here’s a legend for his potential responses to let you know what they might mean in terms of his potential for trolldom:

Eighth: No “cruel and unusual punishment” for your guy! It’s unlikely that he’d be cruel to strangers.

Seventh, Sixth, Fifth, or Fourth: He’s really into criminal justice but probably not a troll. Breathe a sigh of relief.

Third: If he picks an amendment this useless, you should just dump him anyway even if he’s not a troll.

Second: Run. Seriously, just run! Your man might not be an asshole to people on the Internet because he’s too busy being an open-carrying asshole in real life.

First: This could be a huge warning sign. Trolls cite the First Amendment as frequently as college application essays cite “The Road Not Taken.” They think that it gives them the right to verbally harass, stalk, and threaten whomever they want without any consequences. If your man picks the First Amendment, just ask him to explain what it means. If he thinks it means that “it’s a free country” and “people can say whatever they want,” tell him to go back to the playground he learned his politics from and find a new boyfriend.

4) “Can I borrow your laptop really quick?”

Ask him this question when he’s in the middle of using it. And then count how long it takes for him to get his computer into a state where he’s comfortable handing it over to you. If he passes it over immediately with his email and social media accounts still open, you’re likely to be in the clear. This is a man with nothing to hide.

5) “Do you harass people on the Internet?”

I’ve saved the direct approach for last. If the indirect questions above are eliciting ambiguous responses, you might just want to raise the topic of Internet harassment in a more straightforward way. He might be offended that you’re asking him this question, but we’ve all just learned from Reddit that it’s best to be certain before you tie the knot and make a baby.