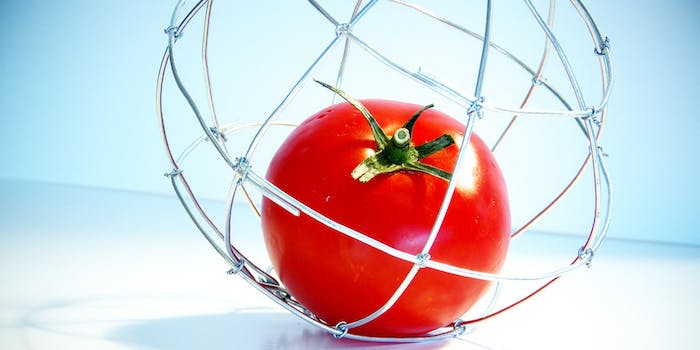 The history of prison food is a human rights abomination, but the future doesn't have to be.

It’s a story so disgusting, it’s hard not to gag while reading it: Catering firm Aramark has been accused of serving maggot-ridden food to prisoners in Michigan and Ohio. Disgustingly, this is only the tip of the iceberg when it comes to the revolting and horrific world of prison food in the United States, a nation where bad food is often considered part of the punishment for people in the prison system. Instead of the legendary “three hots and a cot,” prisoners are instead getting SOS (or “shit on a shingle”). Yet, we have the technology and capability to serve nutritious, flavorful food—so why aren’t we?

Prison food has always been bad: In fact, deliberately serving prisoners bad food has historically been an important part of penal culture. The Western model of imprisonment views it as an opportunity for punishment and reform, with prisoners being provided with bread and water (this diet was recently employed by notorious sheriff Joe Arpaio, lest you think it’s a thing of the past) until they “earned” luxurious foods like porridge, cheeses, or poor cuts of meat. The trashiest, most devalued foods were served in prisons—lobster, for example, was once a low-status fish and, thus, often appeared on prison menus. Wealthier prisoners or those with influence, of course, could afford to bribe prison officials to look the other way when shipments of more palatable foods arrived.

Food was used not just as a tool for punishment in the sense that people who entered the prison system were given terrible food. It also was, and is now, used as a tool for control over prisoners. Those who behave well are offered better food choices, while those who don’t are put on restricted diets. Across the U.S., prisoners continue to receive the dreaded “loaf” as punishment. Riots have started over prison food, as have sustained hunger strikes protesting poor food quality and other problems with prison conditions.

Culturally, many people believe that substandard conditions in prisons are not their concern, buying into the belief that people who commit crimes should be forced to do the time (this also relies on the assumption that everyone in prison committed the crimes that put them there). Eighth Amendment aside, prisoners are human beings along with everyone else, and deserve fundamental human rights. That includes access to health care; freedom from sexual harassment and assault; safe, nutritious food; and freedom from physical abuse. Poor prison food is a human rights violation, and a national shame.

With reforms in the prison system came the attitude that meeting basic caloric needs was necessary, but that prisoners still should be served only the bare minimum. Standards set by individual state Departments of Corrections establish basic guidelines for nutrition but allow individual prisons to decide how to meet them. Now, in the era of prison privatization, the problem of prison food is even more acute. When states turn over the management of prisons to private firms, they also give up many of their responsibilities, including oversight requirements.

While poor prison oversight has resulted in a number of problems at prisons, one of the areas in which it’s most acutely felt is prison nutrition. In Kentucky, worm-filled soup and burritos and brownies with added human feces were on the menu. Around 300 inmates in Arkansas got food poisoning from chicken salad in a facility the CDC characterized as having “food preparation deficiencies,” and hundreds of prisoners were quarantined in Mississippi at another facility with an Aramark-run kitchen. In Oklahoma, a salmonella outbreak sickened prisoners. Pink slime (mechanically separated chicken) sickened prisoners in Tennessee.

Where is the oversight that should be preventing such situations? Last month, Michigan took the remarkable step of banning 71 Aramark employees from entering prison facilities due to concerns about prisoner health and safety, and it was unusual in a landscape where prison abuse often goes unnoticed and undiscussed.

Many states are struggling with the issue of monitoring prisons. In Arizona, for example, private prisons have allowed prisoners to escape while presenting higher per-bed costs for prisoners than the public prison system. So much for the claim that privatization offers savings. Likewise, Aramark has been called into suspicion in Kentucky, where there are concerns that officials are not turning mandated documents over to the government for audits. Despite pleas for more effective prison oversight, many states are choosing to turn the other cheek. Many private prison firms directly lobby regulatory agencies and lawmakers to cut down on regulations, allowing them to maximize profits.

The history of prison food has been one of food as a punishment tool and the provision of sub-standard rations to people who have no alternative, but could the future of low-cost cuisine be different? Institutional food doesn’t have to be terrible, and while we might not be at Star Trek level, 3-D printing is showing immense promise. In Germany, for example, a 3-D printing revolution at nursing homes is putting out fun, edible, tasty food for older adults living in institutions. NASA, meanwhile, invested $125,000 in the development of a pizza printer.

While 3-D printing is experimental, slow, and expensive now, it won’t always be, and it could provide an excellent way to offer nutritious, varied food in prison environments using stable ingredients. It also, of course, comes with pitfalls: When food “inks” are used, it’s easier to sneak in sub-standard ingredients, as well as those that might violate religious or dietary restrictions. While 3-D printing could be the future of prison food (prisoners could even program printers to select their own meals), it could also become a nightmare of pork in Muslim meals, nuts as a cheaper protein filler in the food of people with allergies, and more.

The future of prison food, thus, may rely not just on revolutionary technologies to improve food quality and safety, but also on restoring oversight to the prison system. Every step of the supply chain needs to be monitored and controlled to keep contaminants out and ensure that prisons and private firms aren’t skimping on costs in the interest of profits.