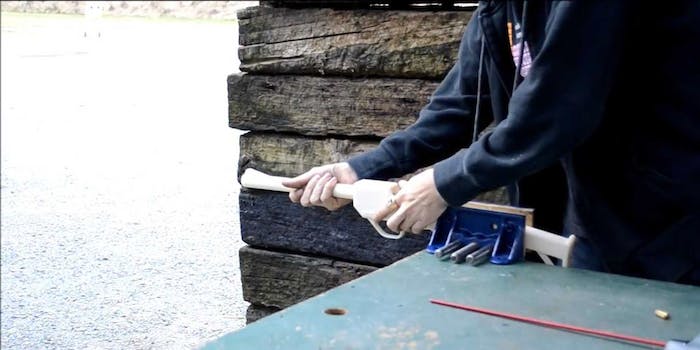 Watch the beginning of the 3-D printed arms race, caught on video

A YouTube video shows a test shot from the first-ever 3-D printed rifle.

The 3-D printed arms race is on.

Just months after the first successful firing of a 3-D printed handgun in Texas comes news from north of the border that the first rifle manufactured by a 3-D printer has been fired. The test was less than ideal, with the gun falling apart after just a single firing, but the creator has promised to improve the design.

The video was posted by a YouTube user going by the name ThreeD Ukulele. In the 40-second video, the presumed creator of the device performs a test firing of the weapon by clamping the device to a table and firing it from a safe distance using a string tied to the trigger.

In the description of the video, published Tuesday, the gun is described as a single shot .22LR rifle. It’s creator claims that it is the first such weapon manufactured using a 3-D printer. He calls it “the Grizzly,” after the Canadian-built Sherman Tanks of World War II.

The gun uses coiled mainsprings similar to those used by the Liberator, the first 3-D printable handgun, which was made by Cody Wilson of Austin, Texas-based Defense Distributed. It appears that the creator of the Grizzly was working independently from Defense Distributed, but the firm did share the Grizzly test video on its Tumblr.

The Grizzly managed to fire a bullet in this first test, but the gun failed to maintain its structural integrity. ThreeD Ukulele says the “barrel split along both sides for about 2 inches and the top of the receiver split the same amount. Some changes will need to be made on the next.”

The Daily Dot was not able to contact the uploader of the video for comment. However, a link on ThreeD Ukulele’s page takes you to a web journal where a user named Matthew shows you how to make 3-D printable musical string instruments—hence his YouTube username.

It’s unclear why ThreeD Ukulele took such a sudden turn in his development of 3-D printable items.

The Grizzly bursts onto the scene less than three months after the first firing of Wilson’s Liberator. Wilson, a self proclaimed anarchist, posted the weapon’s schematics online where they were quickly downloaded thousands of times.

Weapons that can be downloaded and printed are a source of consternation for public safety officials, lawmakers and gun control advocates because they are virtually unregulated and untraceable. They’re also made out of plastic, which makes them easy to get through metal detectors.

That’s why lawmakers were already moving to outlaw such weapons before the first one was even fired. Since these guns have been fired, even more lawmakers are taking notice, with state officials in California and New York also working to ban such weapons.

New York State Assemblywoman Linda Rosenthal, (D-Manhattan), who is currently sponsoring a 3-D weapons ban in the state capitol, says the technology behind these weapons are in danger of outpacing the law.

“Frequently we see the law lags behind society and I don’t want that to happen in this instance Rosenthal told the Daily Dot last month. “This could become a dangerous tool. We can’t have 3-D printed guns be in just anybody’s hands.”