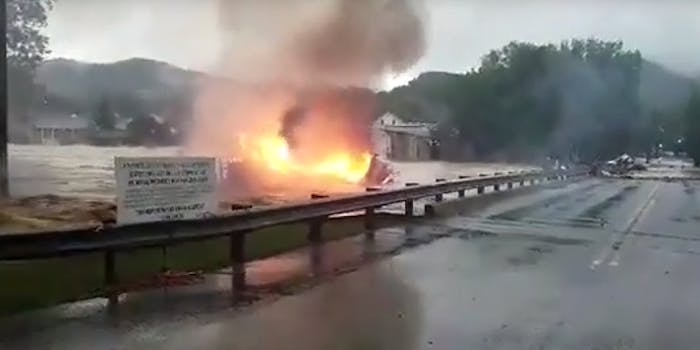 It is the year of our (supposed) lord, 2016. The U.K. has voted to leave the European Union, potentially plunging us into a global recession. Prince and David Bowie and Harambe are all dead—and they’re never coming back. It’s basically impossible to outlaw the high-powered guns that are killing us. Donald Trump continues to be an actual candidate for president. And even if 2017 started tomorrow, there’s no guarantee it would be any better.

In the thick of this unyielding horror, you may have overlooked a more regional tragedy: On Thursday evening, storms battered West Virginia, causing massive floods that killed at least four people and left hundreds of thousands without power. In the town of White Sulphur Springs, locals witnessed a truly jaw-dropping scene as an entire house was swept away by rapidly rising waters while also being completely on fire.

At any other moment in years past, this end-times imagery would have provoked a reaction of pity and terror. Today, however, we’re really just feeling this look. The entire world is a house on fire being swept away in a flood, so why shouldn’t we see this drama unfold on a relatively smaller scale? Kudos to this house for recognizing that the game is rigged—that we’re all royally screwed—and being like, “Fuck it, let’s do this.”

It’s not to say that anyone deserves to have their home uprooted and destroyed (or that any country deserves to be ruined by suddenly xenophobic old voters), but man, what a way to go. We’re not going to forget the burning flood house anytime soon, I’ll tell you that much. Someday, when things are even worse than they are right now, we’ll think back to this, its final blaze of apocalyptic glory, and wonder how we ever got our shit together to start a civilization in the first place. See you then.

Pssst, also, if you want to actually do something to help the victims of the West Virginia floods instead of just moping around on the internet, you can donate to or volunteer with the Red Cross here. That would be nice.