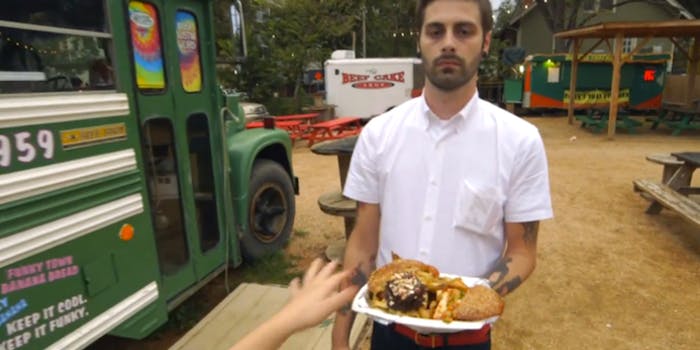 Finally, the dangers of walking in Austin as a hipster are exposed

The 10 hours of walking in New York City as a woman parody video phenomenon has reached eye-rolling, fist-clenching levels, so it was only a matter of time before cities got in on the trend.

And of course Austin, Texas, is first up. “10 Hours of Walking in Austin as a Hipster” follows an apparent “hipster” as he walks the mean streets, being accosted by strangers asking if he’s going to “South By” and forcing their “locally grown, non-GMO, sustainably farmed” Romaine lettuce upon him; being overwhelmed by food truck options; and getting caught in an unwanted conversation with a musician. He can’t keep a straight face when accosted by a cinnamon-kale homebrew-spraying harasser. It’s not funny; kale is a very real threat.

The ending states that this a plea for people to stop moving to Austin, but those never work. If anything, this will make more people want to move here. Just in time for Fun Fun Fun Fest.