#OpJustice4Rehtaeh released the identities of 19 people in a Facebook group supporting the alleged rapists of teen suicide victim Rehtaeh Parsons.

When gang-rape victim Rehtaeh Parsons hanged herself April 5, she saw nothing ahead for herself but a future of accumulating pain. She could never have imagined that her death would unite friends and supporters with an international force of hacktivists and anti-bully activists.


Nor could she have imagined that this alliance, under the Twitter-organized OpJustice4Rehtaeh, would successfully push the Royal Canadian Mounted Police to reopen the investigation of her assault two years ago. Nor that the Halifax Regional Police would open an internal investigation to the negligent way the case was handled, why a yearlong investigation with photo evidence closed without a single charge. Nor that her mother, Leah Parsons, would meet Stephen Harper, the Prime Minister of Canada, to create a Crime Victim’s Bill of Rights.

When a girl ends her life after two years of slut-shaming and harassment, including watching photos of her attack spread around Facebook and her high school, people don’t forget so easily. And of course, there’s backlash. Fed up with the abuse that continues on and offline against a dead rape victim and her family, hacker collective Anonymous decided the law wasn’t working fast enough. It released the identities of 19 people speaking ill against Parsons online.

Previously, the team had withheld the names at the request of Leah Parsons until after the funeral. These screenshots contain blurred-out names of the alleged attackers.

Rehtaeh’s story is well documented in the media. Rehtaeh Parsons was raped by four boys at a party. Then the slut-shaming, bullying and mental health challenges that are so often experienced by the victims of sexual assault followed her for more than 17 months leading to her eventual suicide. Her mother was forced to make the painful decision to remove her from life support, thus saving four others’ lives. Rehtaeh’s former school, Cole Harbour District Highschool, did not support or even acknowledge her when she needed them the most. This is unacceptable. We seek to illustrate that the bullying of Rehtaeh in her immediate community continues on, even after her death. We are highlighting the actions, both off and online, of 19 individuals in Rehtaeh’s broader community. The dox continues for nearly 5,000 words, exhaustively quoting the “Speak the Truth” Facebook group, which was deactivated on April 15 after multiple complaints from, among others, Rehtaeh’s father. The group was a gathering place for those who supported the boys rather than Rehtaeh. The tone can be expressed with a few quotes:

And a different perspective: 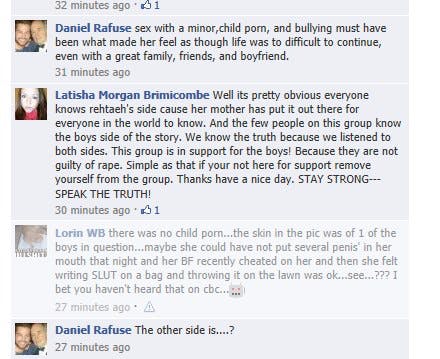 At some point the RCMP reached out to the group defending Parsons’s alleged rapists, prompting admin Latisha Brimicombe to deactivate it. Why? Funny you asked. “Sorry guys but I’m taking down the support group because the police have asked me that it be removed due to the fact this is cause names to get leaked out and spread around,” she said.

That’s right: the group designed to support the boys had been responsible for leaking the name of one of the accused. On April 15, the group was deactivated, but not before organizing a counterprotest and postering in real life, in the fashion of the Westboro Baptist Church, setting up across the street from a pro-Rehtaeh demonstration and sticking posters in front of the Parsons house.

Anonymous knows who the suspects are, but it’s staying silent out of respect or Leah Parsons’s wish that the boys not be publicly named.

A source spoke to the Daily Dot on condition of (extra) anonymity. “I can assure you we had the names of the alleged rapists within hours of the story going live,” he said:

Unfortunately a few short-sighted Anons have rushed to release names (almost every dox I’ve seen has incorrect names). What we don’t want to do is just drop names and start a witch hunt. This has never been about solely highlighting the alleged abusers. It’s about highlighting the facts of that night. The crime itself. We are in essence doing what the RCMP should have done themselves, investigate the circumstance thoroughly.

He told us that while the names of the boys themselves took no more than two hours, finding the actual proof, in terms of incriminating posts, messages, and photos, took a team of several people less than a week. This, of course, brings into question what the RCMP, with their greater (legal) resources, have in terms of evidence.

“The RCMP are playing deaf and dumb with informing the public of the information they have in the case,” our source continued. “Nobody expects them to shout from the rooftops. But they haven’t come out and said the reasoning for dropping the case originally. When we’re completely happy with our efforts the information will go to the people we believe can make the difference in the case. Depending on the direction the RCMP are going it could very well be them. If not, well I’m sure there’s plenty of other people who believe in the importance of bringing justice to a young bullycide victim.”