Pokémon trainers, get your pokéballs ready: A new challenger has most definitely appeared.

Nintendo announced the U.S. release of Yo-Kai Watch 2 for the Nintendo 3DS Monday, thrilling a U.S. fanbase that has been hungry for more of the adorable RPG’s antics.

Yo-Kai Watch 2 shimmies into shelves on Sept. 16, adding 100 new yokai to the series. Sadly there’s no English language trailer just yet, but since the game was released in Japan in 2014, many gamers have imported the title to sate their appetite for adorable demons.

To say Yokai Watch is the new Pokémon is bold; after all, Pokémon is one of the most legendary titles in video game history. But Japan has a masterful grasp of what it takes to make a terrific franchise, and in its home country Yokai Watch has already taken some major jabs at Pokemon‘s reign. July will bring the release of Yokai Watch 3: Sushi and Tempura to Japanese fans, marking the sixth game in a series that got started in 2013.

To understand Yo-Kai Watch’s meteoric success, it’s important to trace it back to where almost every popular Japanese franchise begins: its manga form. Written by manga-ka Noriyuki Konishi (Ninja Hagure, Gogogo Saiyuuki), Yo-Kai Watch came out of the gate with a perfect blend of three of the things Japanese audiences love best: Shounen themes, cute characters, and Japanese history. 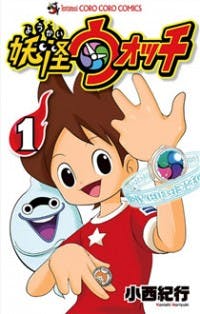 Yo-Kai Watch tells the tale of a young boy who discovers a mysterious machine called the Crank-a-Kai in an idyllic clearing. Turning it, he releases Whisper, the canny yokai that will guide him on his journey. Thanks to a magical watch gifted by Whispher, he can capture yokai and train them to battle enemies.

While Yo-Kai Watch is clearly aimed at a younger audience, it also drew in older fans who enjoyed the historical angle, and it quickly became a smash hit in Japan. Yo-Kai Watch’s creatures are yokai, spirits that have been a part of Japan’s folklore for centuries, first appearing in paintings from the Edo era (1603-1868). For a culture that dearly honors its Shinto origins, yokai are a beloved reminder of the belief that spirits are watching over us everywhere we go.

A key to Yo-Kai Watch‘s depth is its excellent writing. Fitting right in line with Nintendo’s voice, the game is beautifully voiced, clever, and humorous. It takes a turn on yokai’s legacy as frightful characters, spinning them into cuter, goofier versions of themselves. The love poured into the creation of these characters shines, and it makes spending time in their world irresistible. As a light RPG, its also extremely easy to play it bite-sized sessions—no 80-hour grind needed here.

In the midst of the franchise’s popularity in 2014, Nintendo of America decided that Yo-Kai Watch could be palatable for a U.S. consumer and brought the first game to Nintendo 3DS in 2015 (originally released in Japan in 2013). Created by industry darling Level 5, the game sold more than 10 million units by December 2015. Ah, the flavor of success!

Since then the franchise has expanded significantly, and much of it into U.S. territory. The Yo-Kai Watch itself can be found at your local Target, and the free-to-play smartphone game Yo-Kai Watch: Wibble Wobble is highly rated on the U.S. iTunes store. And of course, the second game is coming in September.

It’s interesting to note that while U.S. audiences are just warming up for Yo-Kai Watch mania, Japan’s may be winding down. However, since Americans are further behind in the series, the excitement here is still warming up. Veteran Pokémon trainers, we can hear you grumbling from here—but don’t judge it until you’ve given it a shot!