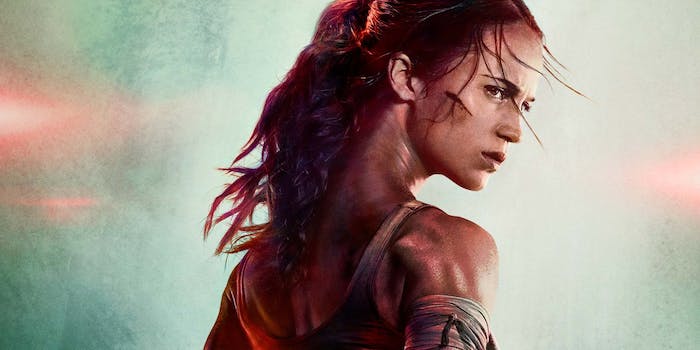 The first new ‘Tomb Raider’ poster is a Photoshop disaster

Those are not natural human proportions.

What do human women look like? Does anyone really know? Apparently not the creator of the new Tomb Raider movie poster, anyway.

At first glance, the poster looks pretty normal. Then when you look again, you begin to realize something’s off. Alicia Vikander’s head is somehow the same size as her waist (maybe bigger?), and her neck is elongated to alien proportions. Her head is turning slightly too far to look natural, like beautiful, quizzical owl, or the girl from The Exorcist.

Once again, Hollywood poster trends have transformed a recognizable actress into a skinny, bobble-headed mutant. Alicia Vikander has been replaced by her Uncanny Valley twin, all because the poster must (must!) adhere to that archetypal “boobs and butt” pose. Of course, it’s comparatively tame by the standards of previous Lara Croft images. But it was bad enough to earn an immediately derisive reception as our first official look at the new Tomb Raider franchise.

how not to proportion head/neck/torso in Photoshop, how not to cut off the top of someone's head, how not to https://t.co/jpih6z72yC

WHAT DID YOU DO TO HER NECK https://t.co/bTg4vsGRJo

What happens when you pull too hard for the boobs-n-butt pose: neck blowout https://t.co/M6c7W4vmis

Tomb Raider, a movie about a sexy yet powerful archaeologist with an extendable, giraffe-like neck, is due out in March 2018.