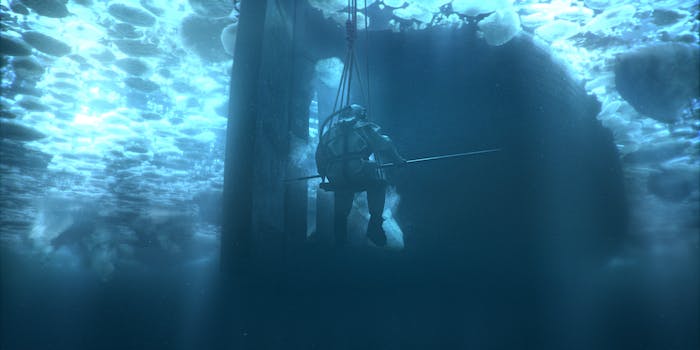 ‘The Terror’ brings an unnerving potency to its sound and score

There's something in the water.

Warning: This article contains spoilers for the first two episodes of The Terror.

Death is imminent for just about every crew member on the Franklin expedition, the ill-fated attempt by Sir John Franklin to find the Northwest Passage as retold on  The Terror, AMC’s new historical arctic horror limited series.

Historical evidence gives insight into their grisly end, and if you’ve read Dan Simmons’ novel (on which the show is based) you surely have an idea of what awaits the crew of the HMS Erebus and HMS Terror. On the show, we learn this through a message that a dying Captain Francis Crozier (Jared Harris) relays to an Inuit hunter. The remaining crew was starving, and death from cold temperatures, illness, or a (fictional) mysterious creature called Tuunbaq, would come for them all. But the real horror isn’t just in the supernatural—it’s in that lull in-between the inevitable, which is driven home by its musical cues.

By the time Henry Collins, the Second Master of the Erebus, puts on Victorian-era scuba gear to dislodge ice from the propeller of the Erebus about halfway through the first episode, the resolve of the crew has already started to fracture. One man, whom Collins attempted to save, drowned after being thrown overboard. Another man named David Young succumbed to illness, but not before seeing a hallucination of a man with the head of a bear and a message warning them to run. Tensions are high and the crew is uneasy even as Sir John Franklin (Ciarán Hinds) called Collins “a pilgrim to the deeps.”

He’s lowered down into the water on a pulley—not far enough to explore the bottom of the Arctic waters, but far enough that he’ll need the scuba gear. He’s armed with a spear meant to dislodge the chunk of ice in the Erebus’ propeller as the scene intercuts with Doctor Henry Goodsir performing an autopsy on Young. And then the music starts.

An eerie melody seeps into the scene and settles in, slowly but surely, while Goodsir saws Young’s sternum and Collins begins to chip away at the ice. The sounds begin to blend together after every cutaway as the music gets progressively louder. Collins succeeds in removing the ice, but he notices, just as we do, that something appears to be coming for him.

We’ve seen this before: the suspensefulness that precedes an attack or jump scare of some sort that pops up in many horror movies. We’re trained to expect something. And sure enough, that scare does occur, in a sense. But it’s not the monster we heard whispers of early in the show or some kind of aquatic predator that scares the living daylight out of Henry Collins. It’s the body of his fellow crewmate, a man named William Orren, who drowned.

The image of Orren floating toward Collins brought on a feeling of foreboding, one that didn’t quite resolve itself by the time Collins was safely back aboard the ship with a strong drink. As far as we can tell, Orren’s corpse drifting on the current in Collins’ direction had nothing to do with anything the crew had already encountered.

Maybe it’s the scene itself, taking place deep enough under the water for Collins to stress how important it was for the crew above to heed his signals. It could be the subverted expectation of bracing for something to pop out of Young’s chest as Goodsir removes each organ before discovering that Young never had scurvy. Perhaps it was the score from late experimental composer Marcus Fjellström, which becomes louder above water while muffled below. Even having it there can be unnerving in the best way; it’s chillingly disconnected to the Victorian garb we see on deck during the autopsy but is right at home underneath the water.

True, we already know how this ends, in a manner of speaking. Collins, Goodsir, and everyone else will likely die, which we’ll probably see play out in horrific fashion tonight and every week until the end of the series. They’ll fall, one by one (or perhaps several at once), meaning that any reprieve for Collins and Goodsir and everyone who survived the first attack from the Tuunbaq is only temporary. Many of those deaths will be out in the open, witnessed by others, attacks by land or on the ship. They’ll have guns and other weapons by their side, perhaps even an ounce of a fighting chance that will ebb away as they become weaker and begin to die. The Tuunbaq, which we catch a glimpse of toward the end of “Gore,” is only as horrific as it is because we can see it.

But there’s also horror in what we can’t see. Collins was vulnerable in that water. If Orren’s body had been a monster lurking in the deep, he’d have been a goner. If something had gone wrong, everyone on board would have been powerless to stop it. And for every death we’ll see in horrific detail, the ones we don’t will also hang heavy thanks to the haunting score.