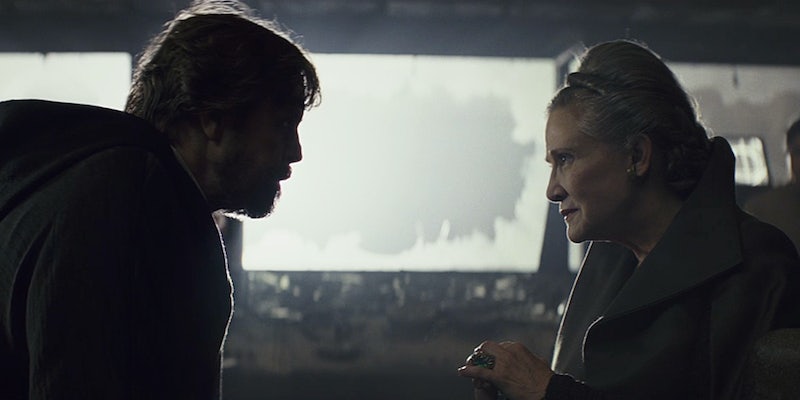 It's a gut punch.

Star Wars: The Last Jedi is so rich with detail that fans are still noticing Easter eggs and parallels, and the latest one is sure to be a gut punch.

J.M. McNab, a Cracked.com writer and a co-host of the Rewatchability podcast, had been rewatching The Last Jedi when he noticed a striking parallel between two scenes featuring Luke Skywalker and Leia Organa. In The Last Jedi, we see the two siblings—separated for years after Ben Solo was turned to the dark side of the Force—reunite just as Leia is about to lose all hope and Luke pledges to face his nephew. But that scene, which is particularly poignant, now called back to the very first scene the two shared together, in a manner of speaking.

It wasn’t Luke’s declaration of his name and his intent to rescue her from the Death Star, but rather one that changed his life drastically: Her original message to Obi-Wan Kenobi asking him for help.

And even earlier in The Last Jedi, Luke is once again driven to help another after seeing a projection of Leia.

As McNab explained, Luke and Leia’s first and last scene in the Star Wars movies mirror each other. Both, as we now know, involve a projection of one to the other. In A New Hope, Leia’s projection to Luke changed his life and the fate of the galaxy, giving him a nudge to leave Tatooine. And in The Last Jedi, Luke’s appearance before Leia also had massive ramifications for the war against the First Order. Luke became a hero after he set out to rescue Leia (and defeat the Galactic Empire), but his final confrontation with Ben Solo and the First Order turned him into a legend, one that will likely inspire the new rebels in Episode IX.

Mark Hamill even commented on it, calling it a full circle.

While not the first time someone’s drawn comparisons to Luke and Leia’s projected encounters with one another, the particular observation from McNab is hitting home for some fans who never picked up the thread between the two scenes. And well, it hurts.

my heart is gone rip https://t.co/cA0NeG2ZD8

But whether fans are just discovering that particular connection now or noticed it on their first or second viewing, it’s evident that there are still other moments from The Last Jedi (even in a movie dissected by frame by some of its fans) that will still astound, resonate, and deliver that emotional gut punch on a rewatch.