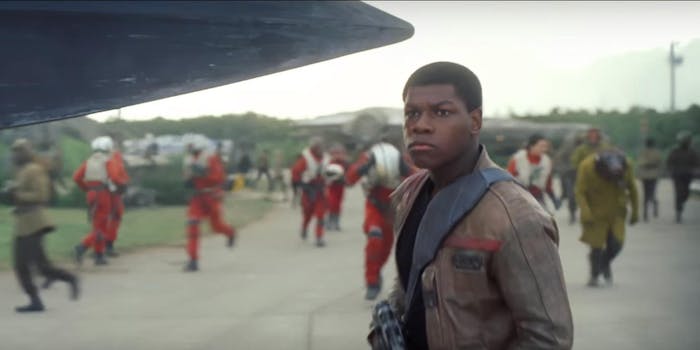 It seems no character is too obscure for a cameo in 'The Force Awakens'.

The Force Awakens isn’t just bringing back household names like Han Solo. You can also expect to see a few obscure but beloved characters from the Star Wars back-catalog. One of them, the Sullustan smuggler Nien Nunb, is even visible in the latest trailer.

Actor and puppeteer Mike Quinn, who played Nien Nunb in Return of the Jedi, confirmed on Facebook this week that he was also in the new movie.

“Well I’m small and blurry and only in a brief moment, but I made the trailer, lol!” he wrote, alongside a screencap from the trailer. “I’m just to the left of Finn’s cheek. You can just make out my large head and black vest.”

Nien Nunb’s most memorable moment in Return of the Jedi is when he copilots the Millennium Falcon alongside Lando Calrissian. That brief role was enough to cement his place in Star Wars fandom forever. Judging from YouTube, the jowl-faced alien is popular enough to warrant multiple fan videos, an MTV True Life parody, and his own song.

Not bad for a character whose main claim to fame is causing accidental hilarity among Kenyan audiences because his “alien” language is actually the Kenyan dialect Kikuyu.