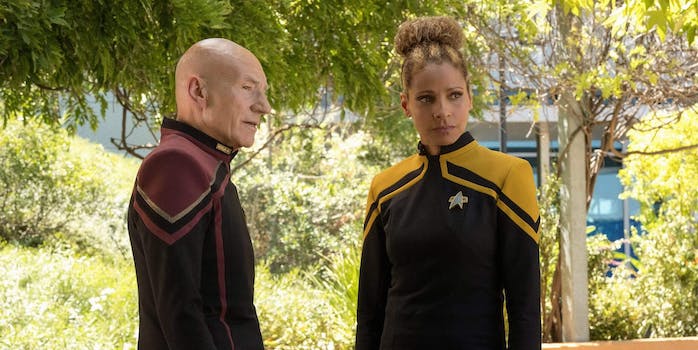 ‘Star Trek: Picard’ recap, episode 3: ‘The End is the Beginning’

A beloved 'Next Generation' character returns to explore a new era for the Borg.

“Nobody’s listening,” says Picard, despairing of Starfleet’s response to the attacks on Mars. “Nobody is thinking, they’re just reacting.” Seemingly overnight, the Federation flipped a switch from inclusivity to defensive paranoia, rejecting Picard’s plan to use reserve ships for the Romulan relief effort. Can’t you use synthetic labor? asks his friend Raffi (Michelle Hurd), another Starfleet officer. The answer’s no, because the Federation believes any android could experience the same “code error” that supposedly caused the Mars disaster. Raffi is disbelieving: obviously the synthetic workers were hacked, perhaps by the Romulan secret police. Although when Picard asks why Romulans would draw attention away from the catastrophe on their own doorstep, she doesn’t have an answer.

This all happened 14 years ago, and these two old friends haven’t spoken since then. So when Picard shows up to ask Raffi for help, she’s understandably upset. Her retirement hasn’t been as comfortable as Picard’s, since he (even in this post-scarcity, post-capitalist future) benefits from inherited wealth on the Picard estate. Raffi, forced out of Starfleet long before retirement age, now lives in the sci-fi equivalent of a Winnebago in the desert, smoking narcotic flowers to take the edge off her frustration.

Utopias are often defined by the world outside their borders, and this flashback reminds us that the Federation was never perfect. It eliminated poverty, sexism and racism, promoting a unified force of interplanetary allies. But while Picard and Raffi are free to express their moral outrage in a beautiful garden outside Starfleet HQ, Romulan civilians are dying elsewhere. Starfleet chooses to preserve its utopian way of life at the cost of others. And while we want to see Star Trek as an inspirational depiction of a better future, this is an ongoing struggle at the heart of the franchise. Back in Star Trek VI: The Undiscovered Country, James Kirk was on the opposite side of a similar argument. “They’re animals,” he says, when he hears that the Klingon homeworld is in danger. “Let them die!” He’s an aging veteran of the Federation/Klingon wars, but by the end of the movie he understands the need to broker peace. By Picard’s time a century later, there’s a Klingon serving on the Enterprise. Things can change for the better, but only if someone makes it happen.

A shared mythology for the Borg

Over at the Borg Cube, we meet an old friend from The Next Generation, Hugh the former Borg (Jonathan Del Arco). Since the 1990s, Del Arco has split his time between acting and political activism, particularly for LGBTQ rights, and his role in Picard echoes that advocacy work. Hugh now leads the Borg reclamation effort, a task that essentially amounts to social work. Outside the bounds of the Federation, he and Soji are doing the kind of compassionate outreach that defines the Star Trek ethos.

“There’s no more despised people in the galaxy than the XBs,” he says. “People either see us as property to be exploited, or as a hazard to be warehoused.” He paints a tragic but predictable existence for his fellow ex-Borgs, followed up by an ominous postscript: “Our hosts, the Romulans, have a more expansive vision. They see us as both.” So, just in case Narek’s undercover mission didn’t clue you in last week, the Romulan Reclamation Site is not exactly a pure humanitarian (Romularian?) project. 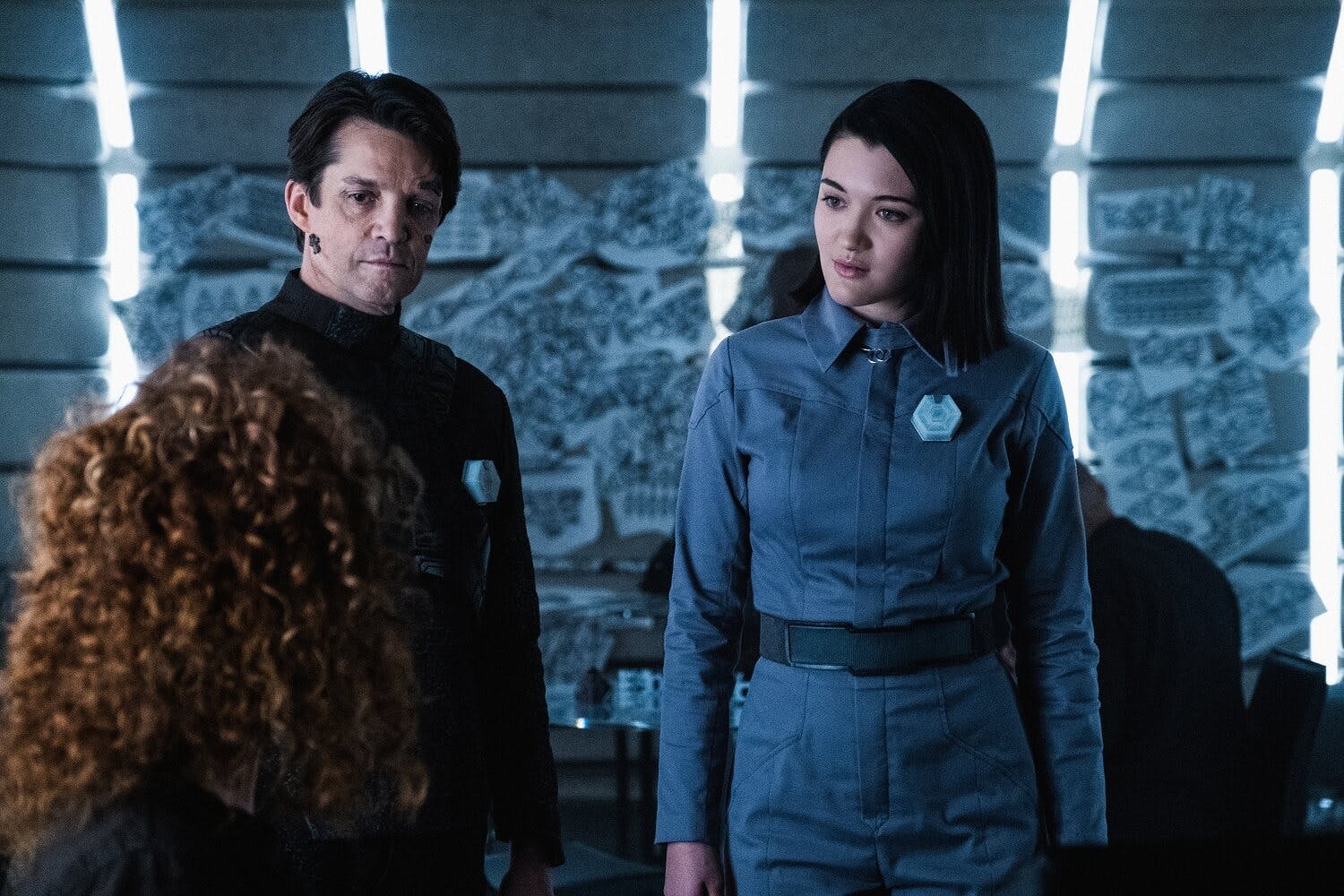 In TNG, Hugh inspired a turning point in Picard’s view of the Borg. Seeing the Borg Collective as an apocalyptic threat, Picard was ready to destroy their entire civilization, and when the Enterprise captured a Borg drone, it seemed like a perfect chance to create a Trojan horse. But after a few hours hanging out with the ever-friendly Geordi La Forge, the drone began to regain its humanity. Geordi named it Hugh, and soon they were fast friends, with Hugh expressing a wide-eyed, childlike curiosity. He proved that people could recover from longterm Borg assimilation, complicating Picard’s hopes for an easy, morally neutral victory. Decades later, Hugh still seems like a sweet guy, but he’s now a more cynical figure – and an efficient political player, I suspect. He sees something unusual in Soji, which may explain why he allows her access to Ramda, a “disordered” former Borg. He wants to see what she’ll do.

Ramda used to be an expert in Romulan myth, writing books that Soji (somehow!) managed to read despite their classified status. “There is ample evidence for the therapeutic utility of a shared mythical framework,” she explains. If the XBs can form their own culture – their own mythical explanation for their traumatic origins – then perhaps it will help them recover. Ramda is an obvious place to start, leading to an intriguing discovery: all of the “disordered” XBs are Romulan, adding another layer to the Romulan hatred of cybernetics. Why did the Borg assimilate so few Romulans, and why did those Romulans react differently to the process? Unlike the other XBs, who are seemingly allowed to wander around the site, the “disordered” ex-Borgs are locked up in a guarded cell.

Ramda has an interesting way of characterizing Borg mythology. She describes it as “the news,” because their creation myth is still in progress. She also has a shaky grasp of time and causality, claiming that she “remembers” Soji “from tomorrow.” Can she see the future, or does she have some inside knowledge about Dahj and Soji? Soji also knows more than she should, suddenly demanding technical details from Ramda’s final mission in the Romulan fleet. Like her sister, her android brain is absorbing classified information without realizing it. Before Hugh can ask what she’s talking about, Ramda breaks down and tries to shoot her, yelling that Soji is “the Destroyer” – whatever that means. Back on Earth, a Zhat Vash agent makes the same accusation while attacking Chateau Picard, a dramatic action sequence where Laris and Zhaban reveal some serious combat moves. But the agent is willing to die to protect his secret.

The Zhat Vash see Soji as some kind of messianic villain, but we don’t know the real truth behind her top-secret synthetic origins. After meeting with Ramda, Soji goes back to her quarters and video-calls her mom – a conversation that knocks her unconscious in a matter of seconds. Her mother – if she’s a real person at all – has some kind of hypnotic power, controlling her android programming from afar.

In some early reviews for Star Trek: Picard, I noticed complaints that the show gets off to a slow start. Critics got the first three screeners in advance, and yes, this episode ends with a more traditional Star Trek intro: Picard assembling his new crew and setting off into space, accompanied by composer Jeff Russo‘s latest riff on the Star Trek theme. If you view this as the “real” beginning of the story, then I see why you’d think the earlier episodes were slow. But that wasn’t how I interpreted it. Star Trek: Discovery actually did have this problem, because it messed around with a more typical Star Trek format: a Starfleet crew with weekly sci-fi missions. Season 1 had some teething problems because it swapped crews after episode 2, taking most of the season to unify the main cast. But Picard doesn’t follow that format, so the ship/crew formula isn’t relevant in the same way.

Structurally speaking, Picard has more in common with contemporary dramas like Westworld than it does with TNG. The first act explored Picard’s troubled retirement on Earth, and introduced a political conflict connecting the Borg, the Romulans, and Data’s twin daughters. Act two will involve a journey into space, with Picard helming a mission to find Bruce Maddox, the cybernetics expert who wanted to dissect Data in the TNG episode “The Measure of a Man.” Maddox’s protege Agnes Jurati (Alison Pill) joins Picard and Raffi on a ship piloted by former Starfleet officer Cristóbal Rios (Santiago Cabrera), but there’s no guarantee these characters will continue as an old-school Star Trek crew next season.

I’d be remiss to end this recap without discussing Rios, the second-last addition to Picard’s main cast. (The final one will be another Romulan, presumably arriving next week.) As a tough starship captain who operates outside the law, Rios is perhaps the most tropey character in the cast. So far he falls into a very recognizable “type,” but Santiago Cabrera avoids being pigeonholed because he’s actually playing two characters. Rios is shirtless in his first scene, manfully nursing a shrapnel wound while lighting a cigar with a blowtorch. He’s treated by the ship’s doctor, a hologram also played by Cabrera, but with a very different personality and accent. While Rios is cool, macho and Spanish, the doctor is more uptight and English. (Cabrera is Chilean, but viewers are most likely to know him from the British TV shows Merlin and The Musketeers.) Later on, when Rios reactivates the doctor, the hologram’s accent switches to Irish. Is this going to be a fun gimmick, or an annoying one? Is the show succumbing to problematic stereotypes by having Cabrera’s Spanish character play the cigar-chomping tough guy while his English/Irish role is the voice of caution? We’ll have to wait and see, because ten minutes of screentime really isn’t enough to judge.

Update Feb. 7, 10:40am CT: This post was corrected to reflect the correct spelling of XBs.