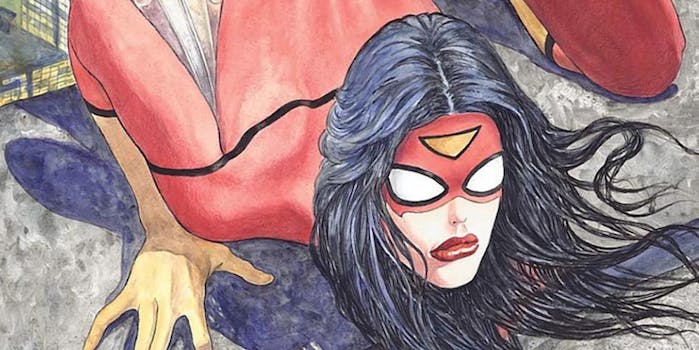 Milo Manara is getting more time to work on Thor and Avengers and X-Men: Axis.

Several variant Marvel comic book covers by Milo Manara, the artist who created the infamously butt-centric variant cover for Spider-Woman #1, have been delayed.

Manara was previously scheduled to provide variant covers for forthcoming issues of Thor and Avengers and X-Men: Axis, according to comics site PREVIEWSworld. On Wednesday afternoon, Bleeding Cool learned that Milo Manara’s covers had not been cancelled, but instead had merely been delayed. His work on a separate graphic novel project prevented him from meeting his Marvel deadline, so the variant covers for Thor and Avengers and X-Men will appear in later issues.

The variant cover for Spider-Woman #1 caused weeks of online furore in the comics community, with many people objecting to the sexualized nature of the art. It didn’t help that the cover closely resembled one of Manara’s illustrations from an erotica comic, or that Manara went on to give a bizarre interview where he appeared to blame Marvel fandom’s negative reaction on the spread of Islam.

Spider-Woman #1 has become iconic for all the wrong reasons. Spider-Woman’s butt-in-the-air pose represents precisely the kind of anatomically impossible contortions mocked by comics satirists the Hawkeye Initiative, who draw male superheroes in sexualized “female” superhero poses. Manara’s art has now inspired plenty of parodies of its own, including real-life gymnasts trying and failing to copy Spider-Woman’s pose, and a 3D model proving that if Manara’s version of Spider-Woman existed in real life, she’d look like some kind of terrifying Silent Hill mutant.

Last month, Marvel editor-in-chief Axel Alonso gave an interview in which he apologized “for the mixed messaging that this variant caused” before describing Manara as “a world-renowned artist whose oeuvre is well-known to us.”

If you’re wondering what happened the original Spider-Woman cover that caused all this trouble in the first place, it is still going on sale as previously scheduled.

Correction: A previous version of this story included inaccurate information about the status of Manara’s comic book covers for Marvel.