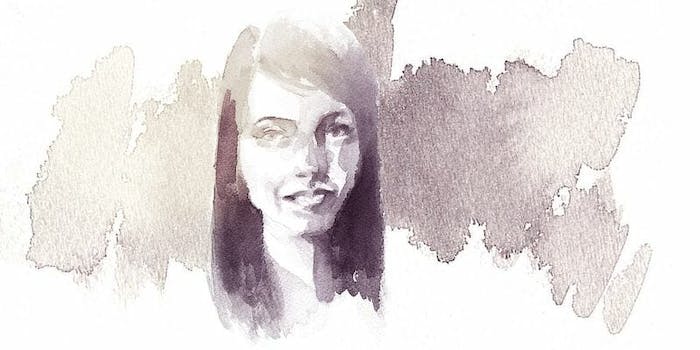 There's more to Reid than what you see on YouTube and Twitch.

Turning on her monitor and jiggling the mouse to wake up her computer, Sonja Reid sets her breakfast on her desk. She’s having an English muffin with raspberry jam, a vanilla Greek yogurt parfait, and a green tea and honey AriZona in a 568mL can (she’s obsessed). Opening up her email—21 unread since the night before—Reid settles into a comfortable position, her feet resting on the edge of her white-and-black gaming chair so her knees are up around her chin. It’s 9am, and she’ll spend the next 10 hours or so in that chair.

Perhaps better known by her handle OMGitsfirefoxx, 25-year-old Reid is a popular gaming YouTuber and Twitch streamer. In the simplest of terms, that means she plays games on her computer—usually the first-person shooter Counter-Strike: Global Offensive, or Blizzard’s newest title Overwatch—while thousands of people watch her online, live, and interact with her in the accompanying chat box. Sometimes she streams creative things like making Pokémon out of perler beads, and then uploads highlights to her YouTube channel.

While that may seem strange to some—even her parents, with whom she has little contact these days, aren’t quite sure what she does professionally—streaming is serious business. Twitch has more than 1.7 million unique broadcasters every month, vying for the attention of over 100 million unique viewers. Some popular streamers can garner a live audience on par with what you’ll find for cable television, which opens up all sorts of commercial opportunities.

Reid started her YouTube channel on Sept. 3, 2013, roughly one month after she started streaming on Twitch, and has since gained almost 710,000 subscribers on her main channel. That’s where you’ll find her stream highlights, virtual reality videos, and collaborations with her boyfriend, the popular streamer Tucker “Jericho” Boner. This year she made Forbes’ 30 Under 30 list, alongside other bright “young entrepreneurs, leaders, and stars,” like Lauren Conrad, Selena Gomez, and Emilia Clarke—an achievement that baffles Reid.

“I still don’t really know how or why anyone approved me to be on that list,” Reid recalls. “I feel like it’s not real. I remember waking up and looking through it, and was like, ‘Wow, all of these people accomplished amazing things, no shock I’m not on there!’ And then I discovered the entire gaming section and saw my derpy face on there and was floored. I feel like I’m just a nerd that loves games.”

Her humble demeanor is one of her trademarks, a byproduct perhaps of growing up in a small city in southwestern Ontario, Canada, with a population around 72,000. In July 2014, when she hit her first YouTube milestone—100,000 subscribers—that meant she had more people watching her than even lived in her hometown, a feat she commemorated in a personal “Draw My Life” video that’s well worth watching.

Before she started doing YouTube videos and streaming, Reid worked full-time in retail. “I was miserable,” she says. “I hated it so much.” The highlight of her day was when she got home and could stream and hang out with fans from around the world. “That was the one thing that made me really happy.”

Reid battles depression and anxiety—something she talks about regularly on her Twitch stream. She says that since she started streaming, her depression fluctuates, and when she’s down she finds it really hard to keep up her routine, because streaming “already drains all my energy out and I don’t have energy for it to drain, so it’s hard to be like, ‘OK, I’m going to be energetic and happy today.’”

Her fans, otherwise known as the FoxxFam, are often what get her through tough periods. They send her photos of their cats, gifts (her favorite part of her office is a shelf full of presents from around the world), and positive messages telling her to feel better and that they’ll still be there for her tomorrow. “That makes me cry more,” she says. “Because I’m like, ‘Dammit, people are so supportive, why am I sad?’”

The inspiration is reciprocated: Reid has received many emails and messages from fans saying that she helps them through their dark periods.

“I never really thought of that until I started doing this,” she says. “And then people were reaching out like, ‘Thank you so much,’ and I’m like, ‘Man I just play video games, but if you feel like this is helping you, good.’” People even ask Reid for advice on how to deal with depression and anxiety. “I’m not the all-knowing depression queen. I can’t even fix my own, so I’m not very good at this, but I try to give them tips that have helped me and be honest with that kind of stuff.”

Balancing her life between work and play can be difficult, especially since the line between the two is blurred to begin with. She usually gets up between 8 and 9, if she’s “not lazy” she’ll do a workout, then eat breakfast while checking emails and editing YouTube videos or recording a video with her boyfriend. After lunch she streams anywhere from four to eight hours before grabbing dinner and getting videos set for the next day.

She likes to joke that her days are like Spongebob Squarepants episodes where Spongebob will be doing something and it’ll cut to six hours later, and he’ll still doing the same thing. In her downtime, she usually watches anime before bed; she’s on a self-proclaimed Fairy Tail binge at the moment. “I’m going to bed usually around 1. I feel like I require 10 hours of sleep, but it’s not realistic.”

While so much of her life is spent in front of a computer screen, for all the world to see, there’s a lot that still goes on behind the scenes. In fact, due to her busy schedule and moving to the U.S., Reid says she’s lost or cut ties with pretty much every pre-YouTube “real life” friend she had in Canada. Instead, she’s gained a great support network within the streaming and YouTube community that understands the rigors of the job.

“A lot of people don’t realize how quickly your day fills up and how much stuff you have to do besides what people see in videos,” she says. “I’m a little bit more motivated in the morning, and I know that if I don’t get a video recorded and I don’t get things done before like 1pm, they’re not going to get done.

“A lot of people don’t realize how quickly your day fills up and how much stuff you have to do besides what people see in videos.”

“Everybody’s like, ‘Do daily vlogs!’ And I’m like, ‘I don’t leave the house, I don’t do anything. You want me to vlog sitting at my computer for 12 hours? That would be my life.’”

Despite her reservation, Reid loves vlogging—she started a second channel, FOXXVLOGS, in January, and it already has over 60,000 subscribers—and wishes she could travel more to do them. In fact, she has a whole book full of ideas for vlogging, challenges, and other things she’d like to try. She would also like to “adventure out” and try more skits, on-screen work, and maybe hosting by the end of this year.

Eventually, she’d like to hit a million subscribers on her main channel. “But I’m not pushing like, ‘Subscribe to my channel, you must subscribe, I must hit my goal,’” she says jokingly. Instead she tries to figure out what people like or dislike about her content, what she can improve on, and what she can do more of by reading the comments and reacting accordingly.

What Reid can do is limited in part by her brand. Authenticity is a currency in streaming, and Reid says she’s constantly turning down companies that want her to promote them or be an ambassador, because it’s not the right fit.

“Overall, you’ve got to protect yourself and your brand, how you’re building yourself,” she says. “Because there are so many things that I would get paid a lot of money [to do], but it’s not ever something I would promote, so it doesn’t make sense for me to do it.”

Reid often turns to her boyfriend for advice on potential deals and gets her manager to look over contracts. One of the biggest problems she faced when she started being approached was knowing how to value herself; her manager helped her set a rate.

Despite the demanding nature and intricacies of the job, and the many hours spent in front of the computer and not out traveling the world, Reid says it’s rewarding when she meets someone who watches her videos or her Twitch stream.

“I see people’s names [in stream chat or comments] and I’m like, ‘Oh, that’s cool,’ and I don’t really register that, ‘Oh my god, that’s a real person.’ So when I do a meet-and-greet and the line actually has people in it, it blows my mind. I’m like, ‘What are you doing here? There’s other people you could be seeing!’” she says, pausing as if to let the thought sink in. “It’s just such a surreal feeling.”