Is this Kickstarter success story the new Cards Against Humanity?

Rooster Teeth is sitting on a winner.

In case you’re wondering what genius idea you have to come up with to get your Kickstarter funded in two minutes flat, you might want to ask the folks at Rooster Teeth.

Known for its Red vs. Blue comedy series, the machinima masters clearly had a major fanbase at the ready when they debuted a fundraising project called “Million Dollars, But… The Game!” on May 10.

The Kickstarter blasted through its $10,000 goal just two minutes after the project launched. As of this writing, it’s crossed the $559,000 mark and keeps going up.

For those of you not in the know, Million Dollars, But (or MDB, as Rooster Teeth calls it) is a popular webseries that’s been running for close to a year. The premise is a simple one: You’ll be given a million dollars, but… you’ll need to survive a randomly chosen scenario that goes along with the windfall, and its likely to be fairly unpleasant. 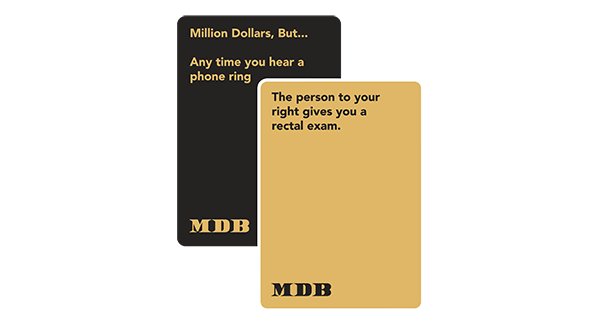 As you can see, being a millionaire might not be as blissful as you hoped. You may want to pocket some lube.

The card-matching system definitely echoes the vibe of wildly NSFW classic Cards Against Humanity. Players use black and gold cards called Trigger and Rule cards to create the scenarios, and a judge decides which of them is the winner. And the object of the game? To get the winning scenario for five rounds, for which you may have to summon up the most depraved parts of your imagination to do (it likely won’t be hard).

If you want to back it, the game is $25 and is due to ship in June. Expansion sets are also available for backers who pledge higher amounts. Rooster Teeth also offered a VIP pledge level where people could pledge $2,500 and be an extra in the MDB show, but you’re too late to grab those—they’re all gone already. Too slow!