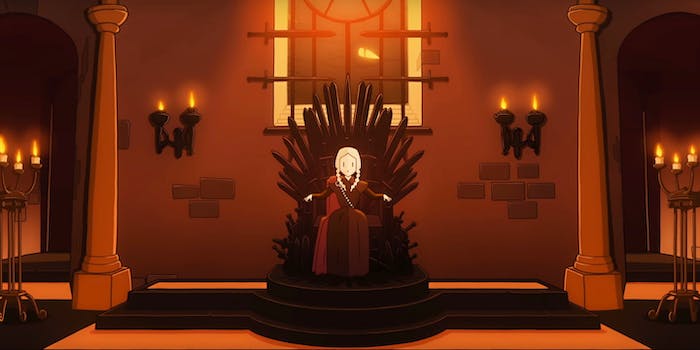 Reigns: Game of Thrones puts the fate of Westeros in your hands

Westeros' fate in your hands.

Think you could sit on the Iron Throne and rule the Seven Kingdoms better than the Game of Thrones characters vying for it? Now here’s your chance.

HBO has teamed up with Nerial and Devolver Digital for Reigns: Game of Thrones, a new mobile game that puts you in control as you play out any number of Melisandre’s visions. Once you select which character you want to play—characters include Jon Snow, Daenerys Targaryen, Tyrion Lannister, Cersei Lannister, and Sansa Stark among others—you’ll discover what might happen once you take the Iron Throne.

Depending on which character you choose, you’ll face a variety of adversaries, issues, and threats—both human and supernatural. And each choice, which you determine with a swipe, could lead down a different and deadly path, proving that while seizing the Iron Throne may be easy, it’s much harder to maintain it.

“Melisandre’s flames have proven hard to decipher and less than reliable, so players may encounter stories they do not expect,” the game’s description reads.

Reigns: Game of Thrones is available to preorder for iOS, Android, and Steam and will become available in October.