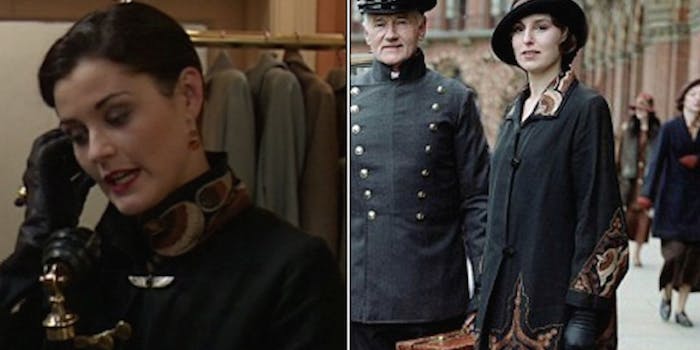 Here’s where you’ve seen that Hollywood outfit before

Have you ever been watching a film or TV show and suddenly feel like you’re experiencing style déjà vu? A character may come on screen in an outfit that you feel positive you’ve seen somewhere before. You may second guess your instincts, thinking every production’s clothes must be unique, but there’s actually a pretty good chance you’re right.

Katie Slawson is the founder of Recycled Movie Costumes, a blog that documents outfits that have been worn in more than one movie or TV show.

“Most film and television productions simply do not have the money or time to spend outfitting the entire cast and extras in new costumes,” Slawson told the Daily Dot. “Sometimes main characters will get brand new costumes and the extras will get costumes that are pulled from stock, while other times pretty much everything used is rented. It varies from production to production.”

Slawson doesn’t work in a costume department, but she’s a graphic designer with a passion for costumes and history. She’s been running Recycled Movie Costumes for the last five years and gets a little help discovering these reused outfits from people around the world who submit their finds. Looking at a few of the costumes featured on the site, it might be hard to see the similarities, but Slawson said to her it’s usually pretty obvious.

“The only time it’s difficult to determine if a costume is the same is if it has been heavily altered between productions, which does sometimes happen,” she said. “I typically look for a pattern or a seam in the same place.

“Sometimes if the costume designer is the same in both films that can be a tip off, as costumers will frequently reuse their previous creations.”

It’s not just the fun of finding a recycled costume that Slawson enjoys. “The costumes are more than just garments that get used more than once—they carry with them an entire history of Hollywood, and that’s what I think makes them so interesting,” she said.

Whether these costumes have been recycled or just inspired extremely similar designs, the blog’s outfit comparisons offer a fun examination of costuming in Hollywood history. Here are a few of our favorites.

1) Doctor Who and Star Wars 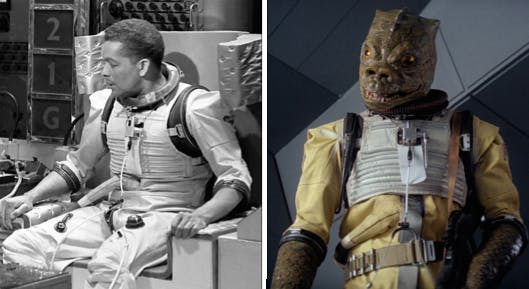 This space suit from 1966’s Doctor Who: The Tenth Planet apparently makes a reappearance on Bossk the bounty hunter in Star Wars: The Empire Strikes Back. 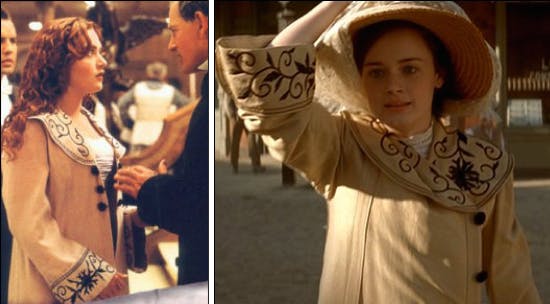 With some slight alterations, it looks like the coat worn by Kate Winslet in Titanic was worn by Alexis Bledel in Tuck Everlasting.

3) From the Earth to the Moon, Mad Men, and The Spoils of Babylon 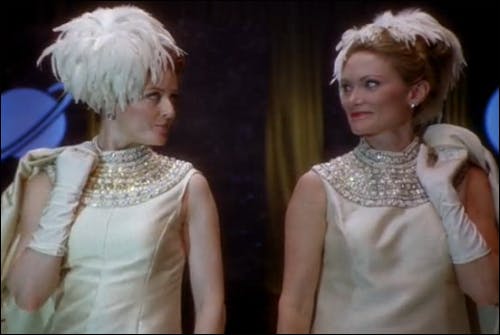 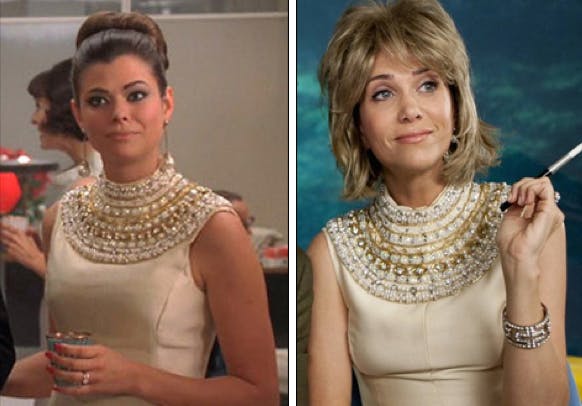 In HBO’s 1998 TV miniseries From the Earth to the Moon, two actresses wear the same dress in the same scene. One or both of these dresses are still being recycled; the dress appeared in the 2010 Mad Men episode “Christmas Comes but Once a Year” and 2013’s The Spoils of Babylon.

4) Buffy the Vampire Slayer and Bones 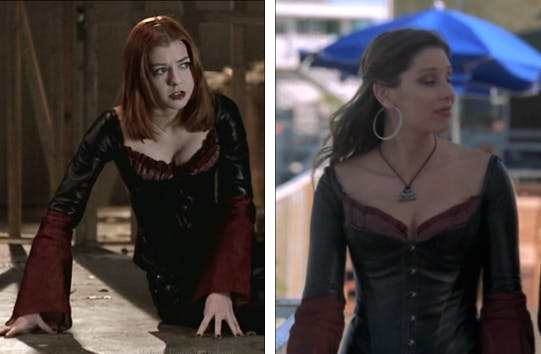 This leather outfit seen in the Buffy the Vampire episode “Doppelgangland” found new life in the Bones episode “The Man with the Bone.” 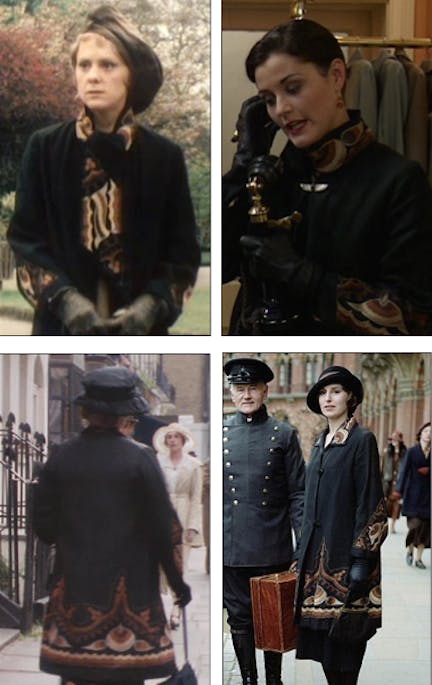 Seen on main characters and extras, this coat most recently appeared on Downton Abbey’s Lady Edith but seems to have been around for almost 40 years! It was first sighted in a 1974 episode of BBC’s Father Brown (top left) before appearing in 1994’s The House of Elliot (top right) and 1997’s Mrs. Dalloway (bottom left).