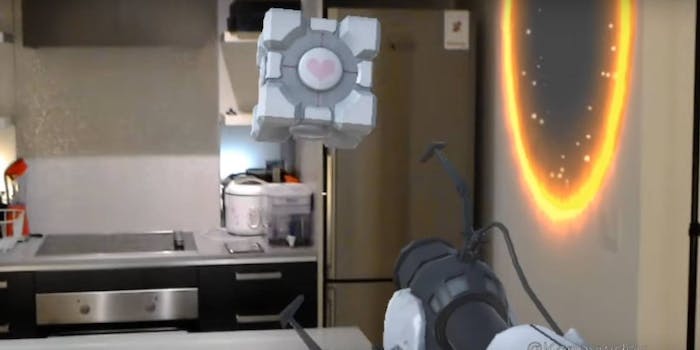 The greatest AR/VR video we have ever seen.

Kenny W shared a video on Reddit that shows him shooting augmented reality portals into actual walls using a holographic portal gun. What happens next is just about the most incredible virtual-anything we’ve ever seen:

The Portal Gun places a Weighted Companion Cube into one portal, which gets spit out of a secondary portal onto a different real-world location. It miraculously interacts with its physical surroundings, for example, the virtual cube falls down human-made steps, lands perfectly on top of a kitchen table, and slams against a wall.

The AR project also mimics the gameplay elements that put Portal alongside the most innovative puzzle games ever created. One of the most mesmerizing is when Kenny W shoots a portal onto the ceiling of a room, and another on the floor directly underneath. He placed the cube into the floor portal where it proceeded to drop down from the ceiling and continue a never-ending free fall.

The developer edition for Microsoft HoloLens is available for $3,000. That may seem like a lot of money, but if it lets you play Portal in real life, well, that’s priceless.