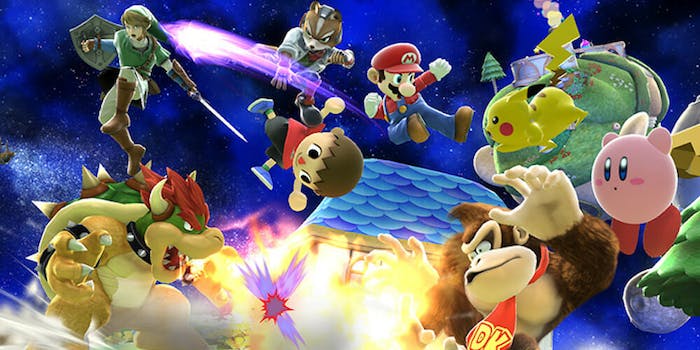 It just might be our first glimpse of Super Smash Bros. Switch.

It was just a couple weeks ago when Nintendo first announced Super Smash Bros. is coming to Switch. Now we know we’ll get a glimpse of the game during a tournament Nintendo will host in June. The battle will take place at the video game conference E3 in Los Angeles on June 11 and 12.

It’s an invitational tournament, so Nintendo will invite top Smash Bros. players to compete. The company has yet to announce how many players will participate.

Nintendo senior product marketing manager Bill Trinen told Polygon, “We want to have an event that showcases a really high level of play. We want it to be fun for the players, fun for the fans in attendance and for those streaming at home. We want to have matchups that people want to see.”

The tournament is similar to one Nintendo held during E3 2014, in the run-up to Super Smash Bros. for Wii U‘s release. That game ended up coming out three months later in September 2014. Does that mean the Switch edition will launch in September 2018? We’ll have to wait for further details, because Nintendo isn’t talking.

Despite that Super Smash Bros. is coming to Switch this year, we still know very little about the game. We don’t know if it’s a port of Super Smash Bros. for Wii U or if it’s a new game entirely. We don’t know which characters will be on the roster or even what it will look like. Presumably, Nintendo will answer most or all of those questions at E3.

This year’s Smash Bros. Switch tournament will also coincide with another competition Nintendo is hosting at E3: the Splatoon 2 World Championships. This tournament consists of four teams who will qualify in the Inkling Open 2018. If you want a shot to compete, you can sign up here.

In a press release, Doug Bowser, Nintendo of America’s Senior Vice President of Sales and Marketing, said, “Nintendo always takes an original approach to video game competitions, and the portability of Nintendo Switch enables unique gameplay possibilities. We’re looking forward to watching some of the best players in the world test their skills against each other in these two uniquely competitive games.”