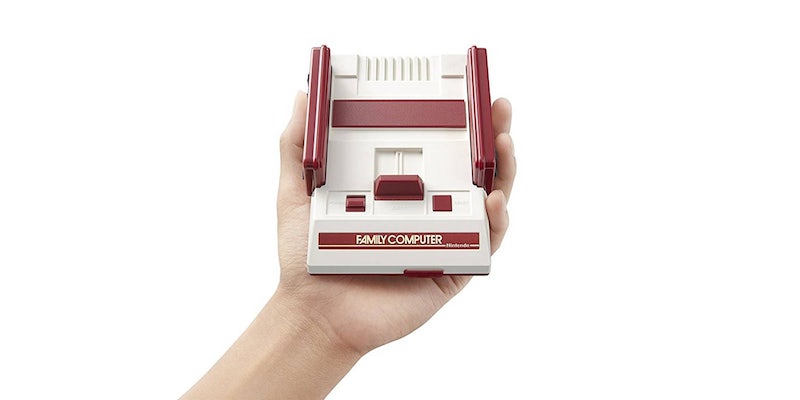 Your mini NES needs a friend, and it's this tiny Famicom.

When Nintendo announced it was making a mini version of its classic NES console in July, the reaction across the internet was something along the lines of, “OH MY GOD, YES!”

But it turns out Nintendo was holding out on us—at least those of us who don’t live in Japan. There, the company is releasing the Nintendo Classic Mini: Family Computer (more commonly known as the mini Famicom).

Like the original consoles, the mini Famicom is very similar to the mini NES. Both come preloaded with 30 games and connect to your TV via HDMI. Truly avid retro gaming fans will be excited to hear, however, that the game lineup included on the mini Famicom is slightly different than the titles on the Nintendo Classic Mini.

Here is the full list of games available on the mini Famicom:

You’ll notice River City Ransom and Final Fantasy III appear on the list for the Famicom but not the Nintendo Classic Mini. (We’ve conveniently listed and ranked the games included on the mini NES for you here). Fair warning: Final Fantasy III is in Japanese-only, so unless you’ve been studying (or you remember the version you imported from Japan back when it was released in 1990), it might be tricky to play.

Both consoles are set for release in November, just in time to help Nintendo with holiday sales. While Amazon preorders haven’t opened yet in the U.S. for the Nintendo Classic Mini (available Nov. 11), it appears the mini Famicom is already accepting preorders on Amazon Japan (available Nov. 10). Both consoles are priced at $59—but the shipping costs and import fees for the Famicom won’t be cheap.

Still, you have to admit: This little guy is pretty tempting.