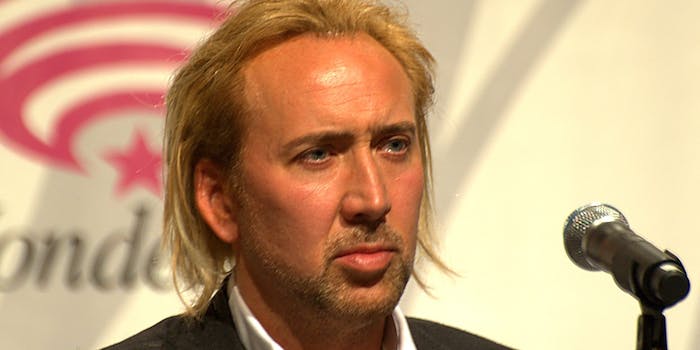 Can you imagine better casting than this?

We usually ignore actors when they talk about their dream superhero movie roles, because “wanting” isn’t the same as actually getting cast. But when Nicolas Cage says he wants to play the Joker, you pay attention. This casting idea is so perfect, we can’t believe it doesn’t come up more often.

Nic Cage has a long history with superhero movies, almost playing the title role in Tim Burton’s Superman movie, and later starring in the Ghost Rider franchise. He also has a Batman-adjacent performance in Kick-Ass. In a new interview with JoBlo, Cage said that while he’s moved on from comic book movies, “I always thought I’d make a great Joker.”

“It would be the perfect one for me to go even more off the rails than I’ve ever done before and, y’know, it’d be fun.”

Honestly, that’s a terrifying concept. What would an “even more off the rails” Nic Cage performance even look like? We’ve seen him scream at bees The Wicker Man. We’ve seen him swap faces with John Travolta. Hell, in Vampire’s Kiss he literally ate a live cockroach on camera. The Joker would be a walk in the park for this guy.

Warner Bros. has several Joker movies in the works, including a Harley/Joker spinoff with Jared Leto and a gritty 1980s-era origin story produced by Martin Scorsese. Joaquin Phoenix is in talks for the latter but hasn’t officially been confirmed yet. So there’s still time for Phoenix to realize how much he’ll hate going on a months-long superhero movie publicity tour and step aside so Nic Cage can replace him. Hey, we can dream.