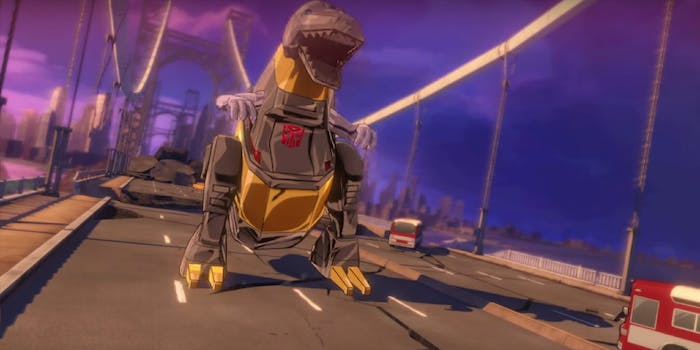 Your favorite Autobots are back in this new Transformers: Devastation trailer

The battle with the Decepticons begins soon.

Preview footage from the upcoming brawler Transformers: Devastation continues to drip with authentic first generation goodness that Transformers fans should be excited about.

Devastation is set in the original Transformers universe as depicted in the 1980s cartoon series, with lots of bright colors, over-the-top characters, and heroic and villainous platitudes aplenty. The Transformers have never since had the same sort of plain-old innocent fun, and the current, dark mood around the Autobots and Decepticons has even worked its way into the modern-day cartoons meant for kids.

Optimus Prime, Grimlock, Sideswipe, Wheeljack, and Bumblebee are all familiar names to Transformers fans. They are also the heroes of Transformers: Devastation. As the new character-centric trailer demonstrates it looks like developer Platinum Games has depicted them accurately.

Grimlock is all about blunt-force trauma. Sideswipe is a flashy show-off. Wheeljack loves his guns and gadgets. Optimus Prime and Bumblebee, well, they say lots of heroic and scrappy things respectively.

The Autobots aren’t the only Cybertronians in the trailer that look like they should. Check out the Constructicons and Insecticons in the battle scenes.

Along with further hope for a proper G1 Transformers game, the trailer delivers a release date. Transformers: Devastation will be out for PC, PlayStation 3, PlayStation 4, Xbox 360, and Xbox One on Oct. 6.